USA Today has produced an absolutely fascinating database that breaks down athletics spending for each and every FBS school in the NCAA. The paper used public records requests to compile the data which they released as part of a package of stories this week.

There's a ton of great data in there but we'll start by giving a peek at the most obvious info. Here is a chart of the profits reported by every SEC school's athletic program for the school year 2009-10. (Note that as a private institution, Vanderbilt is not required to release information on it's finances.) 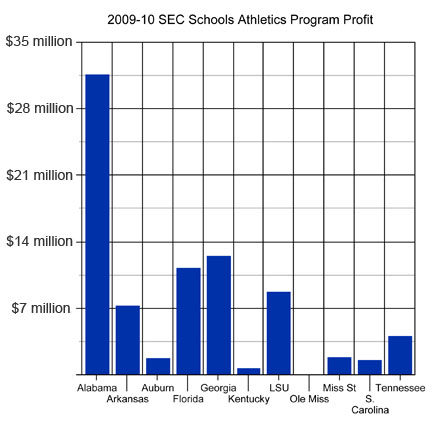 Obviously, Alabama's $31.5 million operating profit is what jumps out immediately. This is almost as much as the profit tallied by the next three schools - Georgia, Florida and LSU - combined. The tally is notable because while Alabama rakes in profits far beyond any other program in the conference, it's expenditures are exceeded by Florida, LSU and Tennessee. To wit:

While no SEC school reported a deficit in terms of Athletics spending, Ole Miss did report breaking dead even. Auburn, South Carolina and Mississippi State all reported less than $2 million in profits from their athletics program. Kentucky brought up the rear at just $697,870 in the red.