Upon his hiring in 1930, legendary Alabama coach Frank Thomas was informed by the school's president Dr. George Hutchenson Denny "Football is 90 percent material and 10 percent coaching; you will be given the 90 percent and held strictly accountable for the 10 percent." Thomas later said these were "the coldest words he ever heard" and, although he believed the figures were a bit off, he understood the importance of keeping a roster stocked with talent.

Eight decades further on we find the importance of recruiting is still a standard of the sport and the emergence of online services designed to cater to this niche is as much proof as one might require.

A few weeks ago we took a brief glance at the SEC numbers provided by a USA Today database that breaks down athletics spending for each and every FBS school in the NCAA. Obviously there is a ton of great data available in that report and none more so than recruiting.

Now the primary caveat that has to be made is these figures represent the overall recruiting costs for all sports within a given school's athletic budget. While it's reasonable to assume that the bulk of the expenses in the SEC will be for football some schools - such as Kentucky - are likely to have other sports taking up a greater portion of these figures.

As always, being a private institution, Vanderbilt isn't required to release its figures and so it is not represented in these comparisons. 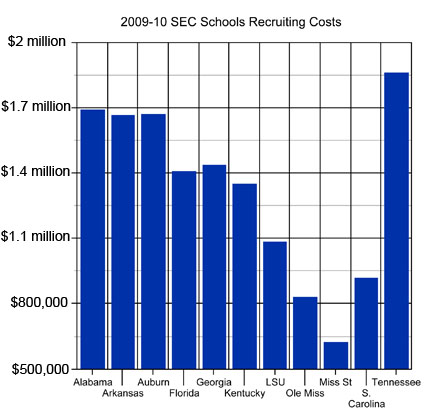 The first thing that jumps out is the amount shelled out by Tennessee - a full 10 percent more than the next biggest spender, Alabama, and more than twice more than reining SEC East football champions South Carolina. That could be at least partially explained by the fact the Volunteers must recruit a larger area than most schools since Tennessee tends to produce a relatively limited amount of athletes given it's population.

As Year2 points out, Florida gets away spending less than many other programs due to the fact the Sunshine state is so talent-rich. "UF recruiters don't have to go very far for their quarry generally," he notes. "And with a few notable exceptions, when they go out of state it's usually to Georgia."

The numbers also make a little more sense when considered in context. The USA Today database also breaks down what percentage each category represents of the overall expenses. Here's how that breaks down for the recruiting costs.

So while the Volunteers recruiting expenses are far and away the most in the conference, they are relatively middle-of-the-pack in terms of percentage of the athletic department spending. And Arkansas, whose overall numbers are in line with fellow SEC West denizens maintains that pace by devoting a much larger portion of the budget to recruiting.

Where the numbers really get interesting is when looked at over the six years of the USA Today database provides. 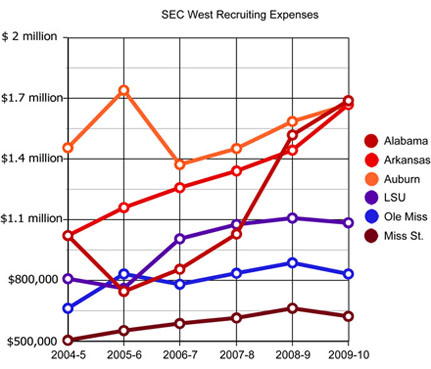 The rapid improvement of the Crimson Tide under Nick Saban makes a hell of a lot more sense in light of these figures. Recruiting expenses increased a whopping 126 percent between 2005 and 2010. And Auburn's complete ownership of Mike Shula certainly seems logical given the almost million-dollar difference in the two for 2005-6.

And while Alabama, Auburn and Arkansas have launched an arms race for talent, the other half of the division has remained stable and in-step with recruiting costs over the past several years. Which, given the performance of the individual squads on the football field, suggests a wide disparity between maximizing the resources at hand. 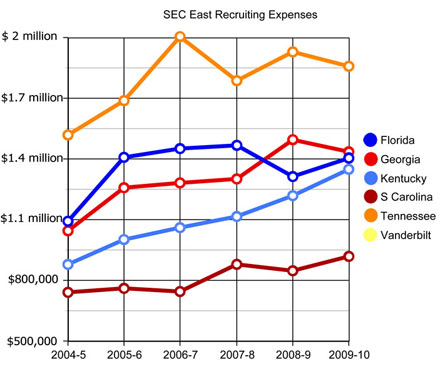 One thing that may affecting the SEC East figures is the higher profile of basketball. While the steady increase in spending by Kentucky could reflect a greater commitment to football, it's also probably a result of the aggressive approach to basketball recruiting on the part of John Calipari. The success of the Gators under Billy Donovan is also one reason for Florida's comparatively higher recruiting costs, and Donovan has recruited players from decidedly non-local areas like Missouri, New York, and Rhode Island in recent years.

Still the epic amount of spending on recruiting in Knoxville over the past half-decade seems a little out of whack with the rest of the conference. While the theory posited by Year2 concerning the dearth of local talent in the Volunteer state certainly may be a factor, it's tough to explain the width of the disparity. It may be that the Volunteers have have a different way of categorizing recruiting expenses than the rest of the SEC.