The weekend in SEC hoops didn't disappoint, as we had to wait until the final game to find out how the seeding would shake out for the conference tournament this weekend in Atlanta.

Alabama took care of Georgia 65-57 to complete 2010-11 with a perfect home record and potentially knock the Bulldogs out of the NCAA Tournament field. Florida beat Vanderbilt on the road 86-76, knocking the Commodores out of contention for the final SEC Tournament first round bye. Tennessee and Kentucky played for the rights to that bye yesterday, and UK rode a second half surge to beat the Vols 64-58.

Here's how the conference tournament bracket ended up: 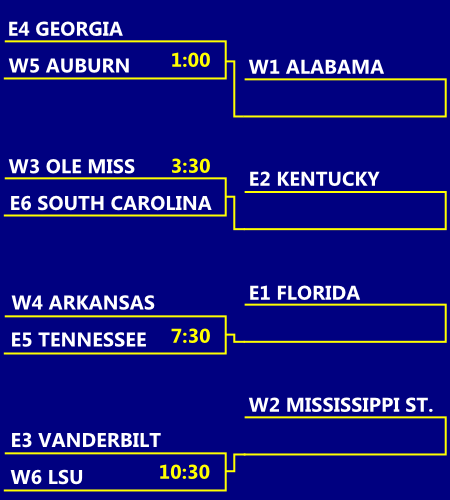 Georgia's draw is both good and bad. It's good in that Auburn is terrible, so the Bulldogs should be able to win their first game. It's bad in that they can't really build their March Madness resume with a win. The presumed second round rematch with Alabama could be to see who gets the SEC's last at-large dancing ticket.

Ole Miss may be out of the NCAA Tournament race, but the Rebels do look like a solid NIT team. Taking out South Carolina would help their seeding there.

Tennessee is not really in bubble territory just yet (I don't think), but losing to Arkansas would be a way to get there. The Vols shouldn't mess around and take care of business in that one.

Vanderbilt ended the season on a down note, losing to Kentucky and Florida to fall out of the second spot in the East. A letdown against LSU would be particularly bad and possibly cost the Commodores a line or two on the bracket depending on how the rest of the nation's conference tournaments shake out.

As always, keep an eye on the mid-majors through the week for potential bid stealing. Two examples: Indiana State took the MVC conference tournament auto-bid from bubble team Missouri State, and VCU upset tournament lock George Mason in the CAA. Root for fellow lock Old Dominion to beat VCU in the CAA final today, because a VCU win removes a bubble team's spot.

Of course, mid-major tournaments aren't all bad. Alabama fans should root for St. Peter's to win the one-bid MAAC today, as the Peacocks (yes, really) somehow beat Bama back in November (yes, really).