Different Ways of Assessing the Alabama and LSU Defenses

Share All sharing options for: Different Ways of Assessing the Alabama and LSU Defenses

Both Alabama and LSU have terrific defenses. You can probably find standard breakdowns of them all over the Internet this week, so I'm going to take it in a bit of a different direction. Here are some non-standard ways of looking at what they've done so far.

It's important to find opponent-adjusted stats where possible and appropriate, especially with these two teams. Alabama's best non-conference opponent was Penn State, who has a really lousy offense. LSU meanwhile had Oregon and West Virginia, both of whom are prolific at moving the ball.

Brian Fremeau's defensive FEI rating, which is based off of drives, includes a cumulative offensive strength of schedule component. As of today, LSU's defensive SOS is rated 46th in the country. Alabama's is rated at 111th in the country. The relative low ratings of those speak to how weak offense in the SEC is, but it also shows that LSU's defense has overall had to work much harder than Alabama's has.

Alabama's defense holds the edge over LSU's in most if not all per play and per game stats, but this is a very good reason for that.

Performance based on the point margin.

Alabama and LSU have generally had the lead throughout all of their games, but not every lead is the same. Here is a breakdown of how many plays the defenses have faced and how many yards they've given up based on their leads at the time.

For these charts, I only looked at games against BCS conference opponents. There's no point in looking at how these teams did against Kent State or Northwestern State.

Up first is LSU because it's ranked first in the polls. Here is how the Tigers' defensive play and yardage shares work: 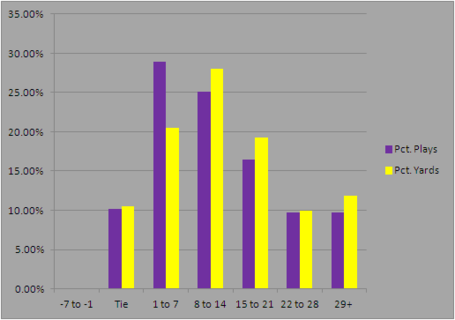 Let's look at how the Crimson Tide defense compares: 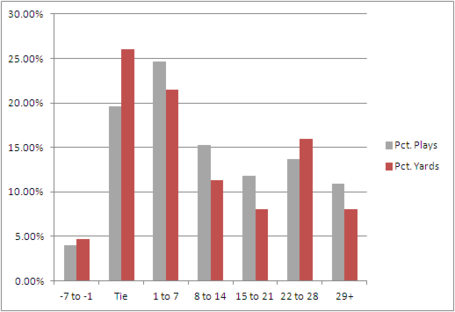 You don't see quite the same effect here. The percentage of yards allowed when Alabama faces a deficit or especially when the score is tied is higher than the percentage of plays faced. The defense stiffens up when the team has a one-score lead, but it's not to the same degree as when LSU has a one-score lead. A big difference though is that the Alabama defense remains quite firm when the lead grows to two and three scores.

These two charts suggest two conclusions. First, it would be huge for Alabama to score first and do it early. LSU's defense does its best work with a one-score lead, and Alabama's defense is not as effective when the team is down or tied as when the team is up.

Second, Alabama has a better shot at a comeback than LSU does. Alabama's defense remains quite tough when the lead grows beyond one score, while LSU's defense loosens up some with leads larger than seven points.

Boom and bust percentages are things I've been looking at periodically over the last few months. A "boom" play is one that goes for 20 or more yards. A "bust" play is one that is stopped for no gain or a loss.

I went ahead and computed the boom and bust percentages for the defenses given the point margin in the game at the time. As with the above, these data are from games against BCS opponents only. LSU gets to go first again: 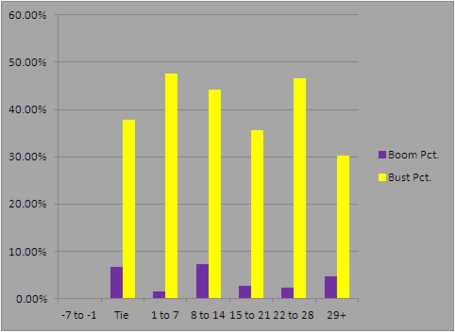 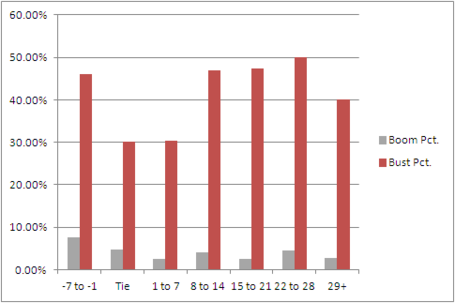 There is a high variance for Bama when facing a deficit, but it has only defended 13 offensive plays while trailing all season (nine against Florida, four against Penn State). High variance on a low sample size is to be expected.

When the game is tied or Alabama has a one-score lead, the bust percentage is noticeably lower (at least 10 percentage points) than all other score margins. It would indicate that in those circumstances, Bama is more concerned about containing the offense than really destroying it. However while you can move the ball past the line of scrimmage better in those circumstances, this chart says nothing about how far beyond it you get. After all, 2 + 1 + 4 = punt. Once the lead gets above one score though, it appears that the Tide really tees off on opponent offenses, holding them to no gain or loss plays at a much higher rate.

None of these factors paint an entire picture of the two defenses, but I wasn't trying to fully encapsulate them either. These are just three interesting colored jelly beans to throw in the otherwise full jars that make up the analysis of the two units.