There was something odd that happened at the end of Georgia's hard-fought win at Vanderbilt. Beyond the blocked punt that almost gave Vanderbilt a chance to come away with a win after it looked like the Dawgs had the game safely in hand, and beyond a receiver dropping the would-be winning touchdown. It started -- well, listen, I'll just let James Franklin tell you what happened.

@marcweiszer
Marc Weiszer Vanderbilt's James Franklin:"I went to find coach Richt and didn't find him, so I found one of his assistant coaches and it didn't go well."
Oct 16 via HootSuiteFavoriteRetweetReply

What does he mean when he said "it didn't go well"? He means it went something more like this: 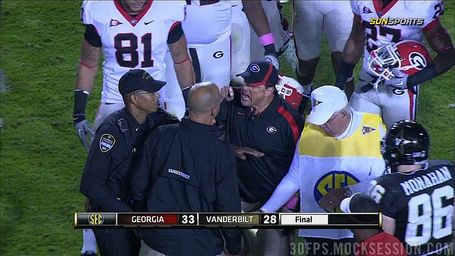 via 30fps.mocksession.com via SBN Atlanta

Whatever Georgia defense coordinator Todd Grantham is saying there, he's very emphatic about it. I'm betting it's not a disagreement about the concessions choices at Vanderbilt Stadium. So what did Grantham feel so strongly about?

@marcweiszer
Marc Weiszer#UGA defensive coordinator Todd Grantham on incident with Franklin: "I love my players and I'm going to support my players."
Oct 16 via HootSuiteFavoriteRetweetReply

Whatever Grantham said, it was apparently enough to set off James Franklin -- a man who generally appears to be in control of his emotions. So we were treated at one point to the sight of Mark Richt trying to separate Grantham and Franklin, along with what appeared to be a few players.

Then, the players started to jaw at each other, facing off for several tense minutes before order was restored. At the same time, a Georgia player whose name escapes me at the moment was lying on the field injured. (That might have had something to do with the confrontation, given that the Georgia defense was on the field when the game ended.)

You'll remember that this isn't the first time that Grantham's intensity has gotten the better of him. And he was hardly the only SEC coach to lose his cool on a day when Will Muschamp had one of the longest and greatest rants at officials in college football history.

But if you're one of those who think distractions matter, then Georgia might have given up an intangibles edge against South Carolina in the race for the SEC East. (The Gamecocks did not look sharp in their first outing following Stephen Garcia's dismissal.)

It does make the World's Largest Outdoor Cocktail Party that much more of a must-see game. Someone is throwing a punch; the only question is whether it's Grantham or Muschamp, and what the other guy does after that.