It was bad enough for South Carolina fans to watch their team slog its way to a 14-12 win, though they've probably gotten used to this team's style of winning by now. What was new and frightening for fans was to watch Marcus Lattimore injured while blocking, then exit the field thusly: 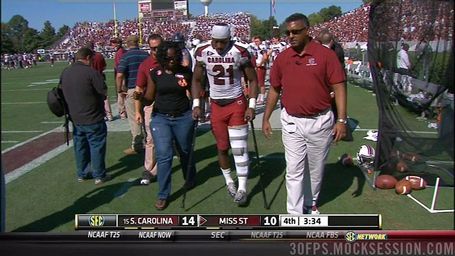 This is, of course, the same Lattimore that single-handedly won the Navy game and helped repeatedly bail out the Gamecocks during the Stephen Garcia-inspired offensive swoon after the Georgia game. (Connor Shaw threw two picks today but also tossed the winning touchdown pass and had a far better completion rate at 20-of-28 than most of Garcia's efforts this year.)

How much does the Lattimore injury hurt South Carolina? Well, some of it depends on how long the running back is out, but the crutches and extensive bracing of the left leg doesn't look promising for a quick return. Early reports indicated a sprained left knee.

Even so, the truth is that Lattimore was in the middle of a season that, while it can't be called a sophomore slump by any rational person, also wasn't exactly matching up to the Heisman hype of the preseason. Lattimore had 779 yards and was averaging 5.3 a pop, but he had broken the 100-yard mark once in the last four games counting Mississippi State, and was nowhere close to that when he was knocked out of the game in Starkville. That one game -- against Kentucky, no less -- was also the only one in those last four where he averaged more than four yards a carry. First three games? Seven touchdowns. Last four? Three.

None of which is to say that South Carolina doesn't need Lattimore to get well as soon as possible. In fact, Lattimore's struggles have been one of the reasons that South Carolina's already shaky offense looked to be on the verge of collapse after the Navy game.

It is to say that all hope is not lost -- especially if the bye week allows Lattimore to come back sometime during a critical three-game stretch that goes at Tennessee, at Arkansas and against Florida.

If not, then South Carolina might have to continue trying to slog their way through low-fi wins. Just like they did before Lattimore's injury -- only now, even that will probably be a lot harder.