Ballotry: Half the BlogPoll Ballot

Share All sharing options for: Ballotry: Half the BlogPoll Ballot 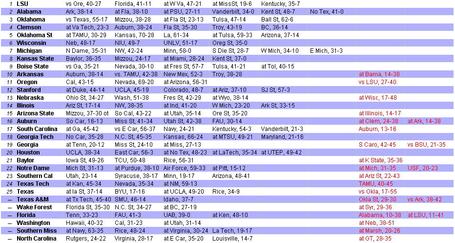 None of this should be particularly surprising, even if No. 4 on the list continues to make me vomit. (Really, I will pay someone at this point to defeat Clemson. Just stop this nightmare as soon as possible.) LSU has what I think is clearly the best resume in the country, and Alabama beats out Oklahoma by thismuch. Nothing would make me happier than a midseason swoon for Clemson and Oklahoma State to beat Oklahoma on general principle. But we'll see.

No, I don't really think that Michigan and Kansas State are this good, but I'm going to keep ranking them pretty highly until someone beats them. That's the way that a resume ballot works. If Wisconsin continues to tear through its schedule, the Badgers will move up as soon as one of the teams above them drops a game. I'm frankly a little bit surprised that I'm keeping Boise this high, but the fact that Georgia seems to be turning things around helps. Arkansas is the first team that makes me wonder if I'm not punishing teams with losses enough -- not because of Arkansas solely or per se, just because they're in the Top 10 while some undefeated teams from AQ leagues are not.

The Ducks and the Cardinal need a quality win to get into the Top 10, at which point you have to think that Boise and maybe one of the undeserving teams will return to their regularly scheduled poll mediocrity. I don't know what to think of Nebraska right now; they've got some wins against potentially average competition paired with getting chased out of Wisconsin and through the Dakotas by the Badgers. The order on Illinois-Arizona State should be pretty self-explanatory, since they played a game and Arizona State hasn't yet done enough for me to ignore that.

That's the same reason I still have Auburn this high, after initially putting the Tigers behind Georgia. It's pretty hard to justify putting Auburn three spots below South Carolina just because the Gamecocks dropped 50 on a -- how to put this kindly? -- suspect Kentucky team. But South Carolina still raises the question of whether a once-defeated team should be ahead of Georgia Tech, which is technically undefeated and a member of an AQ conference but hasn't really beaten anyone of any note yet. Ooh, Georgia. Houston is the first and only non-Boise mid-major to bow in this week.

I have two concerns here. The first is that I don't want to rank Texas after they got dismantled they way they did in the Red River SHOOTOUT, but I also don't see any worthy candidates. The other should be pretty readily apparent: There's a team there that lost to another team that's not in the poll, which wouldn't be such a big deal if it hadn't happened this past Saturday. I'm thinking the way to fix this is to put Texas A&M in at 24, move Tech to 25 and drop the Longhorns altogether. But I welcome any thoughts. Well, any that don't include ranking Wake Forest, something I am not at all prepared to do at this point.