Share All sharing options for: Auburn 16, South Carolina 13: I'm in No Mood to Recap This Game

And there are many reasons why. South Carolina did not lose this game because of the officials -- the officials were all-around awful, in a way that makes it impossible to figure out which team it favored, if it favored any team at all. And as a friend once told me, good teams overcome bad referees.

But there was one officiating error with photographic evidence that is too strong to overlook. Would it have changed the game? Who knows? My personal opinion is that South Carolina didn't deserve to win the game, and Auburn only has a slightly better case. But explain this. 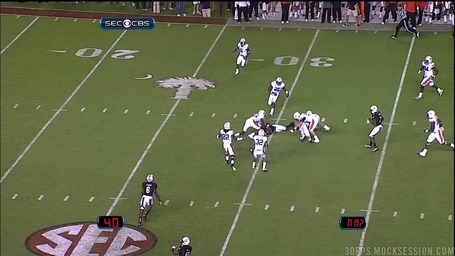 South Carolina, as anyone who watched the game could have told you, could have found numerous other creative ways to lose this football game. But two years after end-of-the-game officiating became a major issue for the SEC, we're right back where we started. A website with a flair for catching important sports moments can get it right mere moments after a game with instant replay is over -- and the officiating crew for a significant game in the highest-profile conference in all of college football can't. That's a sad commentary. Forget realignment for a while; make sure the conference works as it is before you go adding teams to it.

Again, congratulations to Auburn. That call is not why South Carolina lost the game. They lost it because they were the third-best team on the field.

But it would have been nice to have proved it on the field one last time.