Normally, if you were to say that chaos is going to accompany the BBVA Compass Bowl this year, it would be something of a redundant statement. This is a game being played in Birmingham, after all. (Sorry; North Alabama snobbery is a hard attitude to shake.)

But the chaos this year comes from one of the teams and not the city. Pittsburgh fired Dave Wannstedt for reasons that still seem a bit exaggerated at best. They then hired Mike Haywood from Miami (OH), all the while not knowing whether Wannstedt 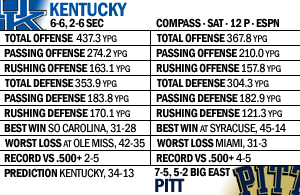 When Wannstedt did finally say that he would not coach the bowl, he told the media that he knew he wouldn't for a long time, "I just didn't want to tell you guys." The interim coach is defensive coordinator Phil Bennett -- who will leave Pittsburgh after the bowl to take the same job at Baylor.

So the Panthers' players will now have their third head coach in about a month when they take the field today in Birmingham -- and they know that none of them will be the head coach when 2011 begins. All they have to do is ignore the sort of emotional train ride that would distract even the most well-balanced veteran football players and focus on playing a game. No problem.

Yes, Dion Lewis and Ray Graham have run for a combined 1,788 yards and 20 TDs. Yes, Tino Sunseri is an efficient quarterback, with 15 TDs to eight interceptions. And yes, Pittsburgh has shown the ability to defeat some schedule-based break-even teams. Not that Kentucky is in Birmingham because of its Snyderesque scheduling philosophy. Not at all.

For whatever you want to say about Kentucky, though, the program has been a model of relative stability over the last several years. In fact, you could make a case that the Wildcats have almost been boring. Except that this year's offense features some players that you could call exciting -- even dynamic. Mike Hartline had by far the best season of his career, going 268-of-405 for 3,178 yards, 23 TDs and 9 INTs -- then introduced a bit of chaos to Kentucky by getting suspended for the bowl game. Randall Cobb is responsible for 2,250 yards while playing almost every offensive and special-teams position except long snapper.

Both of them are also in their swan song, but at least one going to actually be on the field when the game kicks off Saturday, unlike the departing head coach for Pittsburgh. That's the biggest advantage the Wildcats will have against the Panthers -- and it's enough to give them a solid win.