Share All sharing options for: Cotton Bowl Preview: LSU, Texas A&M Battle for the Right to Remember a Better Season

How many times during bowl season are we reminded that it's all about which team is the most motivated? So how do you figure that out in this game, where one team was about ready to board the plane for New Orleans before losing on the road to a team that had often ruined seasons? Then there's the other team, which won its last six games only to be kept out of the conference championship game by a tiebreaker sparked by a loss two months earlier.

The first team, of course, is LSU. Some of the Bayou Bengals faithful were probably already reserving hotel rooms in the Big East for the Sugar Bowl when Arkansas won the annual season-ending showdown, sending the Razorbacks to the Superdome instead. And 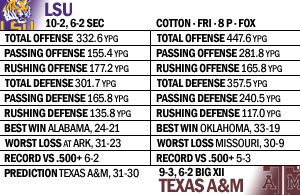 Texas A&M did everything it could after losing to Oklahoma State in late September -- but that defeat was enough to keep the Aggies in a tie with the Sooners, whom they defeated, and Oklahoma State; that sent Oklahoma to the final Big XII Championship Game instead.

So neither of these teams is thrilled to be here given where they were near the end of the season. But both teams would have taken the Cotton Bowl in August. After all, Texas A&M hadn't had a winning season since 2007; it's last nine-win campaign came the year before. LSU had followed up its second national title in four years in 2007 with two seasons over which the Tigers went a combined 17-9 but didn't really look that impressive doing so. A return to double-digit wins in the regular season might very well have saved Les Miles' job, unless he gets a call from points north.

And while this game might not be the BCS berths that either of them could have dreamed about five weeks ago, it's also not what you would call a consolation prize. There are those (self included) who think the Cotton Bowl should be a part of the Series. And anytime you get to play in Jerry Jones' Death Star, you at least get to look at a video board larger than most human beings have ever seen.

The secret to the Aggies turnaround was Ryan Tannehill, who took over at quarterback after sharing time in the win against Kansas and never looked back. A&M scored 120 points in his first three games as starter, and Tannehill was solid most of the rest of the way, though he slowed down a little bit in the final two games of the season. Then again, the final two games of the season were against Nebraska and Will Muschamp's Texas defense, so take that into account.

LSU only wishes it had an offense to worry about. The Tigers slogged through most of the year with the combination of Jordan Jefferson, a running quarterback of questionable running ability, and Jarrett Lee, a passing quarterback known mostly for throwing touchdowns to the other team. The coaches finally settled on Jefferson near the end of the year. But even then, the offense lacked any sort of consistency. The firm of Jefferson & Lee ended up with six touchdowns and 10 interceptions, which is really all you need to know about the effectiveness of the duo.

The running game was another matter. The rushing offense churned out more than 177 yards a game, with Stevan Ridley's 1,042 yards and 14 TDs on 225 carries leading the way. That's why the decision this week that Ridley would be eligible for the Cotton Bowl was watched closely by LSU fans; Ridley is about all the offense has to hang its hat on right now.

The defensive match-up looks to be in LSU's favor, with the Tigers' defense ranked No. 2 in the SEC and in the Top 10 nationally, while the Aggies are slightly above-average. But the game is played on both sides of the ball. And that's why Texas A&M will emerge with a win redeeming the disappointing parts of the season and reminding fans about what made the year that was so special.