We have a lot of fun around here at Ohio State's expense, in part because literally every team in the conference is undefeated against the Buckeyes in bowl games. (That record does not include Arkansas; the Razorbacks have never faced Ohio State before. Don't mess it up.) But give credit where credit is due: Jim Tressel has built one of the best programs in the nation. Really.

Ohio State has the longest currently running streak of BCS appearances, which will hit six with their appearance in the Sugar Bowl tonight. The only one longer in the history of the Series is Southern Cal's 2003-09 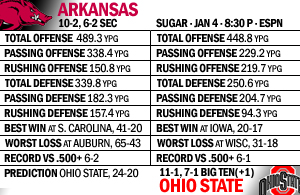 run, part of which is now the subject of some controversy. And Ohio State would have nine consecutive BCS visits but for a down year in 2004. As of kickoff tonight, no team will have been to more BCS games than the Buckeyes. No matter what you might think about Ohio State and the Big Ten, that's pretty impressive.

But that seems to get lost in the talk of having zero bowl wins against the SEC and the three losses to Florida, LSU and Southern Cal in the 2007-09 time frame. Which is fine as the grist for satire and interconference jokes, but's it not a reason to lose sight of the fact that the Razorbacks are facing a very good team tonight. (At least, we think so; it's kind of hard to tell after the New Year's Day that the Up North Conference had.)

And if all that's not enough, consider this: Ohio State has lost one game since Oct. 17, 2009. They are 22-3 since the beginning of last season, often winning by lopsided margins.

Not that Arkansas isn't good. The Hogs are on an impressive run of their own, even if it's quite a bit shorter than Ohio State's. The only losses on Arkansas' resume this season were to reigning national champion Alabama and Auburn, who will play in this year's title game. They clocked SEC East Champion South Carolina by three touchdowns -- in Columbia. They defeated an LSU team that almost everyone had penciled into the Sugar Bowl.

Part of that came on the arm of Ryan Mallett, who might have broken the conference's all-time yardage record if not for injury issues. But Bobby Petrino's pass-pass-pass offense finally found an SEC-caliber runner in Knile Davis, who ran for 100 or more yards in five of his last six games and 80 or more yards in his last eight. Davis also scored all but one of his 13 TDs in the six-game stretch run.

Ohio State built on several players, including the erratic but efficient Terrelle Pryor and three players who averaged at least 70 yards a game in all-purpose yards: Daneil Herron, Dane Sanzenbacher and Jordan Hall. In addition, the offense just shuts other teams down.

All of which is to say that this is going to be a very close game that could go either way. If you put more stock in the Big Ten's implosion Saturday than on the merits of these two teams, then Arkansas is the easy choice to make. But if you look at it as a game between two very good teams, it's almost a toss-up. But many of Ohio State's players have been on this stage before. That and the defense gives the Buckeyes an edge.