Share All sharing options for: Gator Bowl Preview: Mississippi State, Michigan Run Up the Score at an Unexpected Venue

Here are two teams you never expected to be in the Gator Bowl. Sure, part of that is because the Gator Bowl didn't go with the SEC-Big Ten tie-in until this year. But part of it is also because Mississippi State was supposed to squeak into a bowl like the Whateverthey'recallingtheoneinbirmingham Bowl at best, while Michigan was supposed to pouring lighter fluid on the bonfire that was Rich Rodriguez's seat.

Not that the last part of that has gone away entirely. It's pretty clear that Rodriguez and his team go into this game likely needing a win for him to keep his job, at least if the message-board rumors and other usual hot seat 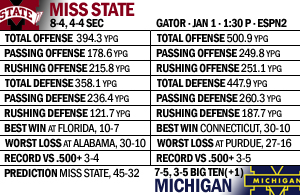 indicators are to be believed. Which can do one of two things to a team: inspire it or cause it to play tight. Give it a reason to rally or cause it to lose all focus.

There are few such problems at Mississippi State. The greatest threat to Dan Mullen in Starkville was that he might leave Starkville; with a contract extension now in hand, that appears to be gone for now. The Mississippi State players are just happy to be here -- not so much in the way that phrase is usually used, to describe someone who is slightly in awe and doesn't care about winning, but in the sense that there's not a lot of pressure on Mississippi State to win, because getting there is good enough. For a team making its first trip to a bowl in several years, and its first trip to a significant bowl in even longer, that's the best attitude to have. Looseness is key.

But that's all guesswork. It's often hard for coaches to get a feel on their players' mindset before a bowl game, and even harder for someone who hasn't been at the practices to figure it out. So let's look at the facts, and the facts begin with the explosive offenses that are going to be taking the field. Take a good look at Michigan's number, which is mind-boggling for an AQ team, until you realize that the Wolverines rang up 721 yards against woeful Bowling Green, 676 in a triple-overtime win against Illinois and 574 against Indiana, which has a defense almost as bad as Michigan's.

Not that Missisippi State is anywhere in the same league, or that it doesn't have its own problem moving the ball against effective defenses. It carded just two outings of more than 350 yards of total offense against SEC teams, against Ole Miss' Swiss cheese Tyrone Nix defense in the Egg Bowl and vs. Arkansas in a double-overtime game. Neither team has done their best work against quality defenses.

But it's not clear that Michigan has a quality defense, or much of a defense of any kind. For whatever you might say about Mississippi State's defense, it's better than Michigan's, and that should be enough.