Capital One Bowl Preview: Alabama, Michigan State and the BCS Berths that Weren't

Share All sharing options for: Capital One Bowl Preview: Alabama, Michigan State and the BCS Berths that Weren't

You have to give Nick Saban one thing: He has a way with fan bases. It's easy for those of us in SEC country to forget that Michigan State fans weren't happy with Saban's decision to take over at LSU. Local media reports say the anger wasn't as deep as it was in LSU when he decided to go to the Dolphins, but we all know that no emotion is ever felt quite as deeply as it is in Baton Rouge.

And it was a long time ago. Any remaining sense of rivalry in the Alabama-LSU match-up is helped by the animosity those schools already faced for each other and the fact that they play every year. Most of the Michigan State players 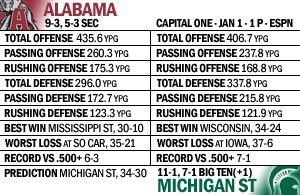 probably didn't even know whether they were going to play college football when Saban left East Lansing. So this is a revenge game for the Michigan State fans, but it's probably not a big deal for the players on either side.

One person who might remember a little bit more clearly is Mark Dantonio, an assistant coach at Michigan State when Saban left. Dantonio is so far one of the more successful branches of Saban's coaching tree, putting together a nice run of coaching that ended with his Spartans just outside of the big-money BCS bowls.

Your humble correspondent still thinks that Michigan State was probably the best team in the Big Ten, but when you get shellacked by Iowa you really have no room to complain. That means that with the Sugar Bowl opting to go with the better-traveling Ohio State, the Spartans end up in the Capital One Bowl against their former coach. Michigan State is one of those teams that is great because they're pretty good at almost everything. There's nothing the Spartans do that will floor you, but there's very little they will do that will lose games.

Alabama's season, meanwhile, would be a success by any reasonable standards. But Alabama fans and the offseason consensus didn't have reasonable standards for the Tide, who were the overwhelming favorites to repeat as national champions. Maybe not as much as some of the other preseason champs who fell apart, but overwhelming nonetheless. Instead, they "only" went 9-3, with two of the losses to the champions of each division and a win against what is likely the second best team in the conference. Had Mark Ingram and Trent Richardson lived up to equally unreasonable expectations, it might have been different, but a trip to the Capital One Bowl is not exactly what you would call a consolation prize for most teams.

This is instead an Alabama team that seems to have rested on its laurels from last year. Nick Saban has said much the same thing in as many words, and I have no real reason to doubt him. The Tide is just playing out the string, and their opponent is trying to prove the Sugar Bowl and everyone else wrong.