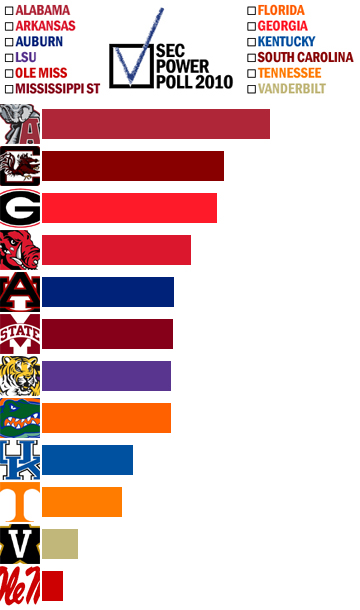 It's unanimous for first place in our first power poll of the year, with Alabama getting all 19 top votes. South Carolina's No. 2 ranking is the highest in the history of our poll, if memory serves, though the Gamecocks rarely end the year where they started. Expect Arkansas to move into third next week, with the team that loses the South Carolina-Georgia matchup falling. The race for fifth is interest -- we clearly have a tier that includes Auburn, Mississippi State, LSU and Florida between the top four and the bottom four. Ole Miss was not the unanimous choice for last, believe it or not; two bloggers, neither of them fans of the Rebels, actually placed Vanderbilt No. 12.

Assuming Ingram is back for the trip to Fayetteville and the Tide D makes the expected mincemeat out of PSU's frosh QB, the biggest story of 'Bama's early season is going to be how much of a non-story their big stories are.--War Blog Eagle

Alabama has already found they guy who will lead the SEC in rushing three seasons from now (Eddie Lacy).  That is how deep the Tide are at running back.--The ACC and SEC Blog

For years the Gamecocks have buried some promising talent behind a shoddy offensive line, but if that line can get its act together -- as it appeared to be doing Thursday night -- look out.--Hey Jenny Slater

Total Gamecock domination against a Southern Miss team that figured to be decent this year.  Bad game by  Southern Miss or a harbinger of great things for USC?--A Sea Of Blue

So far the Thunderchickens looked pretty good on offense, and ... well ... pretty good on defense.  Could it be that the Ole Ball Coach has turned the corner in Columbia?--VolNation

The Bulldogs came into their 2010 opener with a laundry list of questions and answered all of them except one: So y'all gonna be able to do that against a legit SEC team?--Hey Jenny Slater

Without A.J. Green, Georgia's offensive machine purred against undermatched UL-Lafayette.  We are totally buying into the storylines about the implications of this weekends match-up between the Dogs and South Carolina.--Red Cup Rebellion

In his first game as starter, Aaron Murray completed passes to nine different receivers. And none of them were named A.J. Green. If Green comes back, the Bulldogs could be the favorites in the SEC East.--Alligator Army

Is Petrino now an 'established' coach in the SEC?  It almost feels like that.--Rocky Top Talk

Before you get too excited, Hog fans, keep in mind that Willie Martinez shut out Tennessee Tech last year without breaking a sweat.--Get the Picture

Turnovers made this closer than it should have been. Still, Auburn allowed 22 Arkansas St. first downs.--A Sea Of Blue

Gene Chizik was the defensive coordinator at Auburn before he was the head coach.  Keep telling yourself that when you are tempted to attribute Auburn's success to him and not Malzahn.--Red Cup Rebellion

As long as Cam Newton avoids his roommates' laptops, he should be successful at Auburn.--Alligator Army

Sure, it was just Memphis, but you want to know the last time Missy State scored 49 points on anyone? September 14, 2002. (And here's the fun part: It was in a victory over Jacksonville State.)--Hey Jenny Slater

Does 569 yards of offense and five passing touchdowns mean that Dan Mullen has the spread at full speed? Tyler Russell was also 13-16 for 256 yards and threw four of those touchdowns.--Alligator Army

Great. What the rest of the conference really wanted Dan Mullen to have was an accurate quarterback as well as one that could bull over people. I'm thrilled for him. Really.--War Blog Eagle

Well, at least they had a 20 point lead to blow.  Dominant until the fourth quarter, then awful.--And The Valley Shook

Easily the most entertaining team in the SEC.--Rocky Top Talk

RCR wants to congratulate LSU and Les Miles on another come from ahead victory!--Red Cup Rebellion

It was not pretty.  In fact it was an ugly win, but the Ghost of Tebow and some defense aided them to victory.--Leftover Hot Dog

I feel like I'm making a homer pick by putting the Gators at five. At least the defense was decent in week one. Granted it was against a team coming off a 1-11 season.--Alligator Army

Started strong against Louisville but sure seemed to run out of intensity in the second half. Hartline had an efficient day, but Derrick Locke and Randall Cobb are still the only ones on this offense who are going to be giving sleepless nights to any defensive coordinators.--Hey Jenny Slater

The Wildcats went on the road to defeat a BCS out-of-conference rival. No one else in the league did that. Kentucky deserves some credit for that.--Alligator Army

'Cats should probably get more credit for racking up 430-plus yards against a Charlie Strong defense and beating a Big East team on the road. But beating Louisville the last couple of years still didn't get them past 3 SEC wins, so we'll see.--War Blog Eagle

Somehow, I don't think the Vols will be leading the country in scoring defense after the Oregon game.--Get the Picture

The Vols shut out Tennessee-Martin. They will not shut out Oregon, who just dropped 72 on New Mexico. Also, Matt Simms needs to be better than 14 of 24 passing, especially against a weak sister like UT-Martin.--Alligator Army

Derek Dooley did exactly what he needed to do on Saturday: Give Tennessee fans hope. Reality comes this Saturday with Oregon coming to Knoxville.--The ACC & SEC Blog

Actually played a bowl team from last season. In a position to get the win until final minute and a half.--Anchor Of Gold

Jobbed by the refs and sunk by their own mistakes...what else is new?--Vanderbilt Sports Line

'Dores were much more competitive than I expected against Northwestern; maybe they're due for several more soul-shreddingly painful losses than the experts think, huh? (Wait, what, WINS? Don't be silly.)--War Blog Eagle

Manufacturing your own quarterback controversy out of thin air isn't just asking for trouble, it's offering trouble its own trailer and 20 percent of the gate.--War Blog Eagle

The good news is that they don't have to play any more FCS teams this year. (The bad news is everything else.)--Arkansas Expats