For Your Consideration: Ole Miss' Loss, the Border 'Bellwether' and the Bama-Penn St. 'Favorite'

Share All sharing options for: For Your Consideration: Ole Miss' Loss, the Border 'Bellwether' and the Bama-Penn St. 'Favorite'

A few things you might not know about SEC football this week.

Ole Miss is probably doomed
The normal reaction to a loss like Ole Miss' defeat against Jacksonville State -- at least in the always anti-CW blogosphere -- is to say "it's not as bad as it looks, particularly for a first game." Except that really it is. Beginning with Michigan's loss to Appalachian State in 2007, 15 FBS teams have lost to teams from the FCS. Four have ended the year with winning records, and Michigan is the only one from a BCS conference to do so. (The Wolverines are also the only FBS team to lose to a team from the other subdivision and finish the year ranked.) 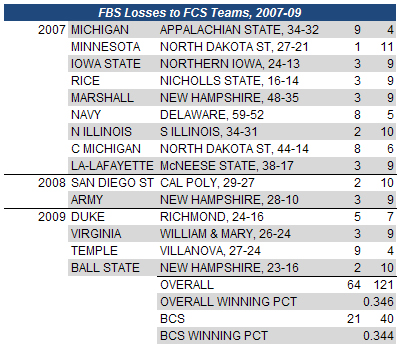 You'll note that many of the records there are of the 3-9 and 2-10 variety, even for teams in leagues like the MAC or even the Sun Belt.

A few other notes from the chart:

Closer to home, the last SEC team I can find that lost to an FCS team -- then still I-AA -- would be Mississippi State's 2004 loss to Maine on a 9-7 score, the first sign that the Sylvester Croom Era might not be everything fans or administrators had hoped for. Mississippi State went 3-8, though one of the wins was against Florida.

Georgia-South Carolina: A bellwether? Really?
Expect to hear it several times over the next few days as we work our way to the highest-profile intraconference battle of the weekend: The team that wins the Georgia-South Carolina showdown this weekend is bound to have a successful season, and the loser will end up with seven or eight wins and a lower-tier bowl.

As with most statements of its kind, there are plenty of examples of how this is true, but the true story is actually a little bit more complicated.

First of all, many of the wins simply confirm what you would think at the end of the season: The better team won the September game. This was a surprise in 2000, when a Gamecocks squad that had gone 0-11 the year before picked off "Heisman contender" Quincy Carter five times (no, it never gets old saying that, thanks for asking). After the bowl season, South Carolina would be 8-4. Then again, so was Georgia. And while the Gamecocks were ranked higher than the Dawgs in the AP poll, Georgia had the higher ranking in the coaches poll. The Gamecocks were obviously more pleased with their appearance in the Outback Bowl than were Georgia fans with the Oahu Bowl; Jim Donnan was fired after the season.

In 2001, South Carolina won again en route to a 9-3 season; Georgia would go 8-4 in Mark Richt's first year. South Carolina would end the year ranked No. 13 in both polls while the Dawgs were No. 22 in the AP and unranked in the coaches' survey.

From 2002-06, during the height of the Mark Richt Era, Georgia won five straight and was almost certainly the better team every year. (It was the Dawgs' longest winning streak in the series since they won 10 in a row from 1966-77.) As usual, the games were almost always close, but it's hard to find someone who wouldn't agree that the better team won each season.

The last three years have been odd. In 2007, South Carolina won the game 16-12 as part of a 6-1 record to begin the season that placed the Gamecocks in the Top 10. South Carolina then lost the next five games to end the year with a 6-6 record, out of the polls and the postseason. Georgia ended up 11-2, ranked No. 2 in the AP poll and started the next season as a national championship contender.

The Dawgs won the next year's game, 14-7, but didn't ever claim the national title many fans were expecting. The 10-3 record and No. 13 ranking were better than the unranked 7-6 season for South Carolina, but both fan bases seemed disappointed.

Georgia also won last year's 41-37 shootout, but arguably had a worse season at 8-5 than South Carolina did at 7-6, if fan reaction is an accurate gauge. (Neither team was ranked by the AP or the coaches.)

The game will likely be close -- seven of the last nine contests have been decided by a touchdown or less, and one of the others was an 18-0 Georgia win in which neither team looked very good. But don't think that the outcome here, while important, tells us who will be a true contender in the East and who will be headed to Birmingham in December. The truth is always a bit more interesting than that.

Alabama's the favorite? That's not a good thing
When I was in high school, I can remember my father complaining about the fact that Alabama no longer played Penn State on a regular basis. He was remembering the 12 times the two met from 1975-90, twice in a bowl and the other ten times in a regular season from 1981-90. (The bowl appearances were in 1975 and 1978 -- the latter a de facto national championship game. They also met in the 1959 Liberty Bowl.)

Alabama is unquestionably the favorite this weekend. They were No. 1 in the preseason BlogPoll rankings (unless noted, all rankings on Team Speed Kills are the BlogPoll rankings) and Penn State is No. 16. The game is in Tuscaloosa.

But the favorite -- or at least the higher-ranked team -- doesn't always win in this game. In the 11 games in which one or both teams were ranked, the lower-ranked or unranked team won eight of them. That includes a win in 1984, when an Alabama team headed for a 5-6 record would defeat the No. 11 Nittany Lions. (In fairness, Penn State went 6-5 by the time it was over.) As the higher-ranked team, Alabama is 2-3.