First, the final combined BlogPoll ballot, after all the fixes to my original half:

Ties broken: Auburn, LSU, Stanford and Oklahoma all had 32 points. As always, SEC teams win first based on the homerism bonus. Auburn gets the nod over LSU because they were more consistent across both ballots. (Ninth in both.) Stanford is ahead of Oklahoma because my ballot was the one given Oklahoma more points and I will more than gladly concede on that. Wisconsin is slightly more consistent than Michigan, so I reluctantly put Wisconsin ahead. Air Force gets No. 25 over Kansas State because of incumbency.

Finally, the ballots that I constructed to contribute to all this, after the jump. 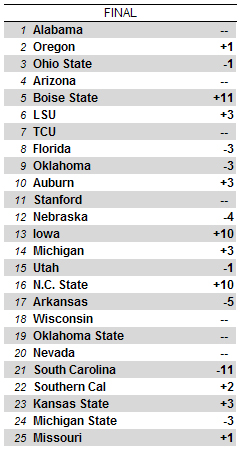 I gave Ohio State another week in the Top 5 based on reputation, but they could still fall before re-emerging later in the season as their resume gets stronger.

I almost moved LSU ahead of Boise, but trust me when I say that's going to happen anyway even if both teams keep winning. (Remember, resume voting is about the final result, not how you get there.) If you want to complain about Florida, send it care of Jeremy Foley. This is what happens when you fill up a schedule with a confectioner's dream. It should serve as a warning to Georgia, but I doubt Greg McGarity is worried about my BlogPoll ballot right now -- or any Top 25 vote anywhere.

I followed the advice that I should move Michigan and Utah down a bit by fixing my own concerns about Iowa being so low. Still not sure they should be No. 13 right now, but the resume ballot next week will correct that if it's a mistake.

I'm really even more confident now than I was before in dropping Arkansas and South Carolina -- though not as much as I had originally -- because I realized that part of my reservations had nothing to do with this past weekend's lost. It had to do instead with both team's "quality win": Georgia. This is the part of resume voting that I really like: No team has a birthright to any place on the ballot because of where they were last week. If the wins that made a team a highly ranked team are no longer all that good, then there's no reason to keep the team in its current place if it keeps winning or if it doesn't lose badly. If Georgia didn't look like an absolute basket case right now, both Arkansas and South Carolina would be higher. The whole season is taken into account each week, not whether a team should move up or down based on what happened in the last game.

I decided to move Southern Cal down to No. 22, and I am sincerely hoping that this weekend will be the end of their time on the ballot. We'll see. Kansas State, MIchigan State and Missouri are almost as much "why nots?" as anything else.

1. Alabama
Got the death-defying win against an SEC West rival out of the way early this year, I see.

2. Florida
The Kentucky win is enough to temporarily believe they're the second best team in the conference. The true test is some minor game being played this weekend.

6. South Carolina
Defeat someone who hasn't or wouldn't lose to Mississippi State and we'll talk.

7. Kentucky
Yep. It was the annual Pastryfest, not any kind of Joker Phillips-inspired revival in Lexington.

9. Vanderbilt
No, I don't believe Vanderbilt would need overtime to win against UAB.

10. Tennessee
This team is the best argument against firing Mark Richt right now.

11. Georgia
Speaking of ... wow. Given the fact that my joy at any rival's troubles are tempered by the Auburn game, I'll just leave it at that: Wow.