Ballotry: A Bad Draft of Half of the BlogPoll Ballot

Share All sharing options for: Ballotry: A Bad Draft of Half of the BlogPoll Ballot

Let me go ahead and say this and get it out of the way: This is not going to be the final half of the BlogPoll ballot that I submit. So I'm asking for extra help this week to correct the mistake I would otherwise make. 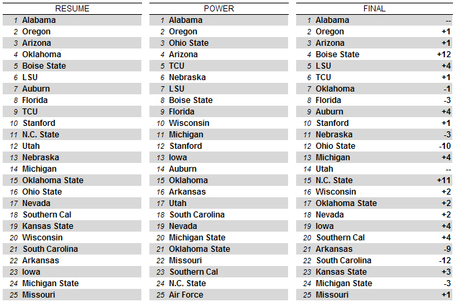 Resume is worth twice as much as "power" on this one. (I don't really like that name, because it's more than just who would defeat whom on a neutral field.)

You can click on the chart and read the numbers yourself, so here are the problems I see:

Of course, I also welcome any thoughts on someone I've left out or an issue I didn't list above. But remember that resume is important at this point of the season. Next week, that's all that will count.