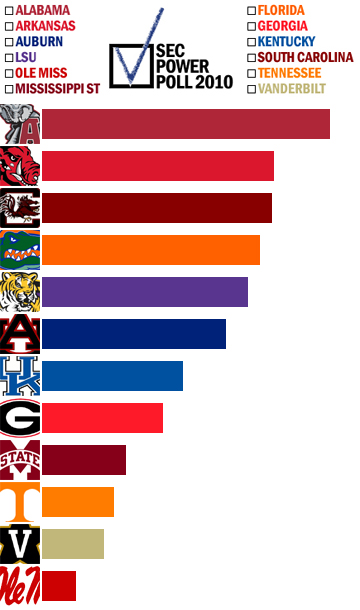 Because I had a request for this in my inbox this week: The last-place votes are 10 for Ole Miss, 1 for Georgia and 0.5 each for Tennessee and Vanderbilt. So Ole Miss is not alone.

Arkansas moves from fifth to second this week, moving South Carolina and Florida back a spot, while LSU moves past Auburn. Again, 28 points separate Alabama and Arkansas; 24 stand between Arkansas and Auburn at No. 6. Georgia drops only one place after the loss to Arkansas, and the "final four" remain the same.

They look really, really good.  Someone pass me a bottle of scotch.--And The Valley Shook

Most Alabama fans believe the Tide will never lose another game between now and the end of time. I have no evidence before me to suggest that they are wrong.--Dawg Sports

Still don't know if I'd call their defense SEC-championship caliber, but it looks improved enough to earn a pretty decent bowl bid, if nothing else.--Hey Jenny Slater

Passed their first test of the season without any colors, flying or otherwise. --And The Valley Shook

Has any SEC team done anything as impressive as lead Georgia by two TDs on the road in the fourth quarter? Does any team have the Hogs' upside if the defense really is this competent?--War Blog Eagle

Unimpressive victory over a weak team.  Is this the real Gamecocks or just a down week.--A Sea Of Blue

Perhaps the best-balanced team in the league.  Good on both sides of the ball, and effective in the run and the pass.--Rocky Top Talk

Sleepwalked past Furman. But ‘Cocks have always been dedicated sleepwalkers when it comes to I-AA competition.--War Blog Eagle

The Gators are good enough to win this year's version of the East, but not much more.--Get the Picture

A big week for the Gators: they won in Knoxville, and no players were arrested.--Arkansas Expats

The Gators are winning but making it look hard to accomplish the feat.--Leftover Hot Dog

Setting a field goal record in a game where they go +4 in turnover margin tells you a lot about where the Tigers are at right now.  Getting outgained by a struggling Mississippi State offense tells you even more.--Get the Picture

For all their concerns on offense, they are quietly working their way through a very difficult schedule.  With Stewart and Miles on opposite sidelines, the West Virginia game ought to be entertaining.--Rocky Top Talk

We await to be informed how this most recent 20-point win was not actually impressive.--And The Valley Shook

Yes, Clemson's coaches are that dumb. But give Ted Roof and Gus Malzahn credit for making adjustments in a game where they could have gotten buried.--Get the Picture

Lose to South Carolina, the wins over State and Clemson were "lucky" thanks to opponent errors. Beat South Carolina, and there's no excusing a 5-0 start, right? Yeah, it's a bit of a big game.--War Blog Eagle

Still questioning this team and how good they are.  SEC games coming up will tell us what UK football is all about.--Leftover Hot Dog

To their credit, the ‘Cats are 3-0. Then again, there probably are about 75 Division I-A programs that would be 3-0 against that schedule. Play someone, already!--Dawg Sports

If Mike Hartline is actually this good ... and Locke and Cobb stay healthy ... the old Andre' Woodson days might have been just the beginning for Joker Phillips's offense.--War Blog Eagle

It's gonna be hard for this offense to accomplish anything of note if the coaches can't find a setting for Murray other than "do absolutely nothing" and "carry the entire team on your back."--Hey Jenny Slater

Victim of a tough schedule or just a mediocre team in the SEC? I think it's a little bit of both.--The ACC & SEC Blog

Look on the bright side, State fans: With Mullen at the helm, it now takes two QBs to throw five picks in a single game.--Hey Jenny Slater

3 incompletions.  5 interceptions. That is a statistical anomaly.--And The Valley Shook

A competitive bunch no doubt but needs to win games before we give too much more credit.--Leftover Hot Dog

Passion -- which these Vols are playing with -- will only take you so far. They just don't have the horses to hang in there with decent teams for a full sixty minutes.--Get the Picture

Are fans pining for the glory days of the Lane Kiffin era?--Arkansas Expats

If only games lasted two quarters. A couple of bright spots emerging but nothing to blind you.--Leftover Hot Dog

Great job, great win. Have fun with the next game.--A Sea Of Blue

Congratulations. You are better than the Fightin' Ackbars.--And The Valley Shook

Yes Vandy is a winner. Just one though.--Leftover Hot Dog

When you're three games into your season and a loss to Vandy at home is by far the least embarrassing setback in your ledger, you have issues.--Dawg Sports

12. Houston Nutt & Jeremiah Masoli.
I am not even sure Ole Miss deserves to even be mentioned in an SEC power ranking right now.--The ACC & SEC Blog

1-2 with a 14-point win over Tulane and two home losses, one to a I-AA team and the second by two touchdowns to Vanderbilt. Meaning that Ole Miss is probably the 12thiest 12th it's possible to be. Maybe we should just go to 13 this week?--War Blog Eagle