The BlogPoll method this week moves us one step closer to a pure resume ballot: This one weighs the power and resume poll equally to give us the final result. There are fewer and fewer differences between the two now, as teams like Alabama and Ohio State give us enough information to back up the preseason guesses, and teams that have surprised early begin to get some more credit on the power half. Hopefully, someone will go ahead and defeat Southern Cal so I can remove them from the resume ballot.

We'll go ahead and list the Top 10 here and then go with the chart and explanations after the jump. Tell me where I'm wrong. 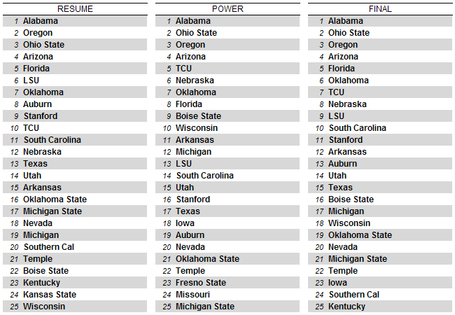 Most of these teams do well on both the resume and the power portion of the ballot. Alabama has played a mix of good and bad teams but not really been challenged by anyone; Ohio State has blown everyone out of the water; Oregon has annihilated any team that faces them. I won't say I told you so about Arizona. Florida is actually beginning to look like a football team that can snap the ball properly.

Oklahoma is a confusing team to me. The Florida State win was impressive and I think Air Force is actually pretty good -- but not quite that good. And there's also the Utah State game. I think TCU is going to be a good team, as will Nebraska, but both lose a bit on the resume poll for the moment. I have so far seen little to indicate that LSU or South Carolina will stay in the Top 10 for long.

Stanford has looked good so far this year. Arkansas and Auburn both face good teams this weekend; we'll have more information on them when those games wrap up. Utah is there, and Texas finally has a resume win with the victory in Lubbock.

If Nevada wore a different shade of blue, had orange instead of silver as its second color, and had the Broncos as their mascot -- well, they would be getting a lot more respect in the major polls right now. At least as much as Boise State, whose signature win is not looking near as good as we thought it was. Michigan was in a game with Massachusetts for a while, which is enough to make me reconsider having them anywhere close to the Top 10. Wisconsin's one-point win over Arizona State also makes me nervous. Is it possible that Oklahoma State is actually a good team this year?

Michigan State's win against Notre Dame caused the coach to have a heart attack -- literally. Temple might be this year's Ball State -- remember the year when the Cardinals were undefeated going into the MAC Championship Game? Iowa is the only team with a loss on the ballot, but it's a good loss. Southern Cal is not going to be here next week, or at least I hope. Kentucky gets the nod because they have a BCS win and have dismantled the other teams they've played.