One Way That B.J. Daniels Racked Up Yards on Florida

Share All sharing options for: One Way That B.J. Daniels Racked Up Yards on Florida

Last weekend, USF's B.J. Daniels carved up Florida's defense with his feet to the tune of 107 yards on 17 carries. A large part of that had to do with him being a great athlete who is hard to bring down solo. Some of it also had to do with Florida's young linebackers overpursuing and otherwise being out of position at times.

In a few instances, it simply came down to a numbers game. Let me explain.

One of the biggest selling points of the spread-to-run philosophy with a mobile quarterback is that having a signal caller who can run can often give you a numerical advantage. If you can have a blocker for every defender plus the ball carrier, that's a big advantage. Let's take a look at one particular play in the second quarter. 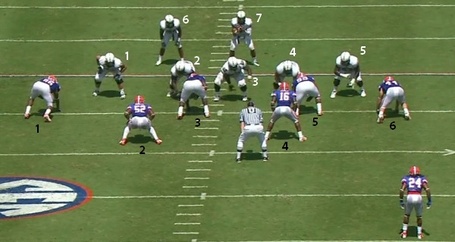 From the second quarter on, the Bulls employed a lot of one-back sets with four receivers. This is one of them. Florida generally countered that formation with a nickel package in man coverage. Usually it was a 4-2-5 as you see here, but every so often the Gators used a 3-3-5 stack.

I went ahead and annotated this screenshot to show you that Florida has six men in the box while USF has seven men there available to use. Florida's safety Josh Evans (No. 24) is playing center field, so he will backpedal as soon as the ball is snapped.

This is a perfect example of why you'd want to have that mobile quarterback. The left tackle will pull to the middle while the running back will pick up the defensive end on that side. The tackle then becomes the lead blocker that Daniels can follow through the hole. Fast forward a few frames and... 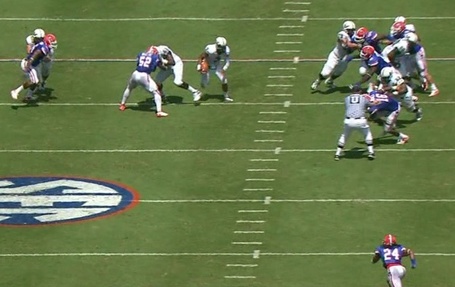 ...all six of Florida guys have a white hat on them as Daniels is free to go for a big gain. Evans is now having to hustle from 20 yards away to come stop the quarterback, though you can see A.J. Jones (No. 16, next to the umpire) beginning to shed his block. Daniels would get 10 yards on this play and pick up a first down.

The Bulls exploited this numerical advantage three times. The only time it didn't go for 10+ yards was when Florida lined up in a 3-3-5 and the offensive line couldn't sustain blocks on the smaller and faster linebackers. In all, Daniels went for 25 yards on those three plays, or 23% of his gains on just 18% of his carries.

Going with six men in the box against seven worked well enough against South Florida, as Daniels had a dreadful day throwing the ball that neutralized his running to a large degree. I just wonder how well it will work against Mississippi State down the road as the Bulldogs have a better offensive line than the Bulls do. If nothing else, the defensive backs will have to do better to shed blocks earlier to help out in run coverage.