A word of explanation first: The SEC Power Poll has never been comfortable as an institution with the idea of preseason polls except as a source of fun. So if you're going to do that, go ahead and take it the logical extent, and judge teams based on something that is not on the field at all. Which is what we've done this year, with our preseason poll based on uniforms. Who has the best sartorial judgement in the view of our voters? Here you go: 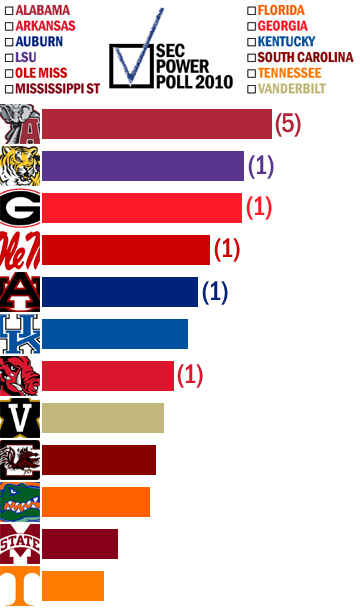 Voters speak after the jump.

Very plain, but when your program is as historically strong as Alabama's is, you don't need to go screwing around with wacky uniform combinations. And the numbers on the helmets are iconic for a reason.--Hey Jenny Slater

I have Alabama rated right in the middle of SEC uniforms.  On the one hand, they are one of the few teams that haven't changed their style keeping a very classic look.  On the other hand they haven't updated in their style in a long time.--The ACC & SEC Blog

They wear white at home and any number of crazy outfits that look like they came out of a Mardi Gras costume store when they're on the road. Crazy, but somehow appealing. Their purple uniforms don't have quite the Barney-like quality that Clemson's do.--Garnet And Black Attack

Again a little old school and love it when they rock the black unis.--Leftover Hot Dog

Georgia has a great uniform. The silver pants are a nice accent to bring out the black and white in the uniform, which is a classic look. The only problem is the traditional "G". Outside of the South, the "G" is for Green Bay. The Georgia "G" was made in 1964, three years after the Packers.--Alligator Army

Other than the cursive "Ole Miss" on the helmets, there's not much to comment about one way or the other. I probably would've put them higher if that Admiral Ackbar mascot thing had gone through.--Hey Jenny Slater

The blue/orange combination is not exactly novel, but the interlocking "AU" logo is one of the more recognizable in college football.--Hey Jenny Slater

Aside from tailoring changes and a modernized word mark, the Auburn uniform is the same as it was 40 years ago. The helmet logo is still the interlocking AU and the jersey is uncluttered. The simple set is classic.--Alligator Army

The all blue is cool playing on the bluegrass. --The ACC & SEC Blog

There's no more unique helmet logo in all of college football than that ferocious pig.--Arkansas Expats

I'm still having nightmares about the look that featured hogs on both sides of the helmet and on both shoulder pads. If you're showing off that much pork, you'd better be prepared to serve up some barbecue.--Dawg Sports

They do black better than Colorado, Wake Forest, Oregon State, or really any team which rocks the occasional black uniform.--Red Cup Rebellion

Black suits look good. Black football uniforms do not. Vandy's black-on-black desperately needs pants striping. Actually, all of their pants could use striping. The jersey piping needs to go, since it wraps around to the back. However, Vandy does get points for the coolest logo.--Alligator Army

As cluttered and distracting as Florida's uniforms but with a worse color scheme.--Red Cup Rebellion

Call me a homer but love the uniforms this year.  Who doesn't love garnet?  I wish they sported more black, but it is like 120 in Columbia, so I understand.--Leftover Hot Dog

I wouldn't have too much against the base unis, but the throwbacks they seem to love so much are terrible.--Garnet And Black Attack

The biggest problem with Florida is how "busy" their uniform is. Everything has an outline or a stripe or a logo on it. Keep it simple.--Red Cup Rebellion

You can't do much with maroon and black, but the Bulldogs did themselves no favors. The shoulder piping is unnecessary, especially when it wraps around. The jerseys don't need alternate color side panels either. Mississippi State could also use a cool Bulldog logo for their uniform.--Alligator Army

Let's face it . . . the Western Division Bulldogs are ‘Bama done wrong. When you're the class of the conference, you can wear boring uniforms, and the press will think you're minimalist. When your last SEC championship was in 1941, though, it merely makes you dull.--Dawg Sports

My UT-alumna girlfriend insists that Tennessee's orange is based on a variety of flower that once bloomed in the center of UT's campus, and is NOT the same shade as a traffic cone, hunting vest, or Creamsicle. Granted, I'm colorblind, but my reply is always "Whatever you say, sweetheart."--Hey Jenny Slater

My problem with Tennessee isn't the shade of orange. It's allowing black to become a part of the jersey. From black socks (comparison by Paul Lukas), to the black borders and black lettering, it is as if the Vols are Orange, Black and White. Get rid of the black and look like the Tennessee teams of old. As for the orange-on-orange look, I like it. Like the 1984 Padres, orange-on-orange is so ugly, it is cool.--Alligator Army