Last year's Florida offense did not live up to its billing. It was able to firebomb the cupcakes as expected, and it had some highlights against Kentucky and Georgia. More often than not though, it struggled against good defenses.

Perhaps more than anything else, the issue was the way that Tim Tebow tended to get laser-locked on to Riley Cooper and Aaron Hernandez to the exclusion of his other receivers. If they weren't open, more often than not he'd take off and run. In the past when that happened it was with Percy Harvin, and that tended to work well enough. That's because it was Percy Harvin.

I ran across a play in last year's Vanderbilt-Florida game that is emblematic of the problem. 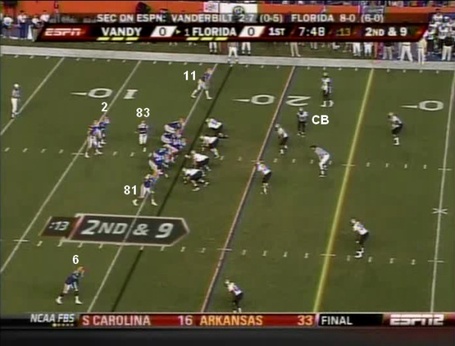 Here is the formation: one back (Jeffrey Demps #2), with three receivers (Cooper #11, David Nelson #83, Deonte Thompson #6), and one tight end (Hernandez #81). It's a play action pass. As best as I can tell (there was no replay), only Thompson is going long. Cooper runs a seven-yard out pattern, Hernandez and Demps do short curls over the middle, and Nelson goes short towards the side line.

Hernandez is probably the No. 1 option on the play as he's the first guy Tebow will look to. However, notice the cornerback who is supposed to be coving Nelson. He's late in reacting to the motion because Florida lined up quickly. Nelson is at full speed while his man is just now starting to move. That's a big advantage, especially since Nelson's route will take him even farther to the right side of the field.

Now let's check on things when the ball is snapped. 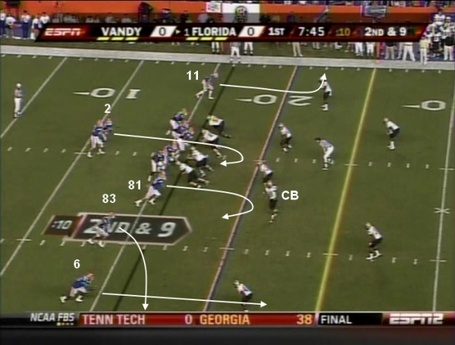 This shot is from right when the ball is snapped to Tebow. Demps is doing his play fake before plunging through the line for his short route. Nelson's cornerback is just now getting to the vicinity, and he's not set and ready for the play. 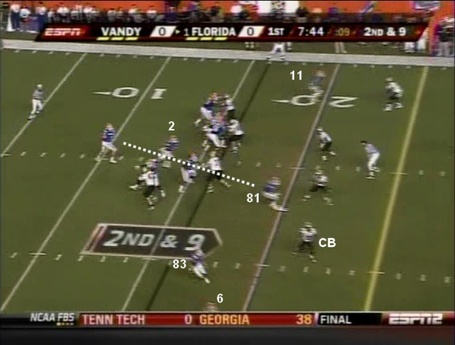 Tebow stares down Hernandez from the start. Meanwhile, Nelson is filling the space Thompson is vacating in a hurry. The slow-reacting corner is five yards off of him and not taking the best angle either. If you're concerned about the safeties, don't be. They've retreated out of sight to cover things deep. They're way out of the play.

Now as you can see, the linebackers didn't bite on the play fake. One appears to be playing good, tight coverage on Hernandez while the other one is eyeing Demps. Going to Hernandez would have been great if they had bit on the play fake, but no dice. Let's see how this finishes. 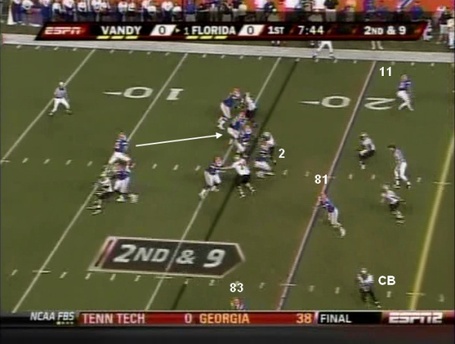 Look at the game clock in this shot and the last. They both say 7:44, so less than a second has gone by.

The defensive end on Tebow's blind side ran far up the field, catching the notice of Tebow. That end is still being blocked by RT Marcus Gilbert and wasn't much of a threat, but great as Tebow is, he doesn't have eyes in the back of his helmet.

Tebow has already seen the linebacker coving Hernandez and now he feels pressure. This would be the time to step up in the pocket. Cooper is just now breaking, Demps hasn't even gotten through the line yet, and Hernandez's curl caught the backpedaling linebacker off guard. Furthermore, there's still five yards of separation between Nelson and his covering corner. There are still some options if he wants them.

Instead, Tebow has already decided to take off and run no more than a second and a half after the snap. In fact, he ends up running right at his blockers into congestion instead of into some of the open green space to his right. He ended up picking up four yards on the play after cutting back to the middle to set up a third-and-five, which wasn't a bad outcome. Not many other quarterbacks could have picked up those tough running yards, something that is part of what made Tebow what he was.

The play could have had a better outcome though had Tebow shown some measure of patience in the pocket. Or, for that matter, had he recognized the slow moving corner who was assigned to Nelson. If Tebow saw that and gone to Nelson immediately instead of looking at Hernandez first, a completed pass would have resulted in at least 10 yards, if not more.

This kind of thing was all too common last season after Tebow's concussion. He didn't get it while scrambling, but rather while standing in the pocket. He never was quite comfortable in the pocket again (understandably) until the Sugar Bowl, and his lock-on syndrome with Cooper and Hernandez only got worse. Florida's offense was still effective enough to win all but one after the concussion, but it never had a chance to live up to its preseason billing.

So what does this mean for 2010? Well, John Brantley is not as much of a scrambler as Tebow was. Even if he takes some shots, he's much more likely to step up in the pocket in this situation rather than take off. Florida will lose some of Tebow's tough first down runs, but it will gain many more yards in situations like this one.

It's a trade off, and how lucrative a trade off it is will go a long way to determining how Florida's new offense will fare this fall.