SEC 2010 // Your Turn: Vanderbilt's Road Back Is Long, But Maybe Not Too Long

Share All sharing options for: SEC 2010 // Your Turn: Vanderbilt's Road Back Is Long, But Maybe Not Too Long

So, remember those SEC 2010 surveys we ran all summer long? I know some of you kept asking about when we would publish the results, and here they area. We begin with the Vanderbilt Commodores, an almost unanimous choice for last in the SEC East this year even before Bobby Johnson retired. 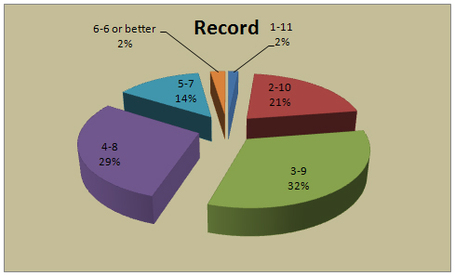 This is actually more optimistic than my Vanderbilt preview and more in line with Year2's Vanderbilt predictions. A solid 61 percent of responses call for the Commodores to go 3-9 or 4-8, the highest combined total of any two predictions. Of course, most if not all of these votes came before Robbie Caldwell took over in Nashville. It might be interesting to run the survey again and see if things have changed at all. But we run short on time before the season begins. 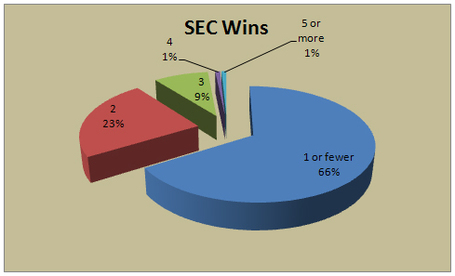 There are a few apparently delusional Vanderbilt fans who voted for the Commodores to be in the running for the SEC East, which would be the logical result of a four- or five-win league season. However, the overwhelming majority of our voters see Vanderbilt winning one game in the conference if they win at all. Nothing wrong with hope, though. 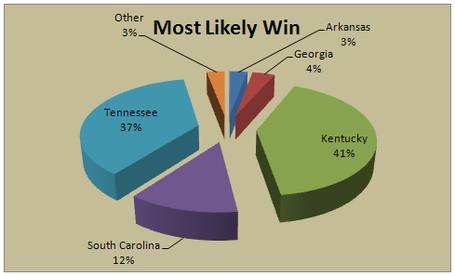 However, we did ask people who voted to choose the team most likely to lose to Vanderbilt if the Commodores won a game in the SEC. Kentucky and Tennessee are your runaway favorites, probably because Kentucky is generally considered to be the closest team to the Commodores in the pecking order and Tennessee is in what we call a "rebuilding" year. Interestingly enough, the only SEC East team to actually lose to Vanderbilt two of the last three years -- South Carolina -- comes in a distant third. 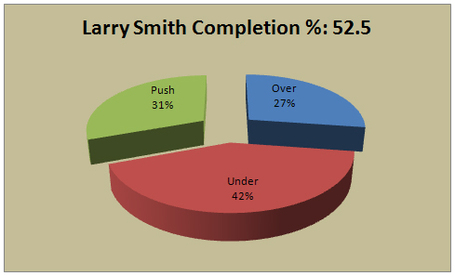 It could have been worse for Larry Smith -- after all, a majority of respondents still believe he will complete at least 52.5 percent of his passes. But the winner here is the under, which would probably indicate a long season for the Vanderbilt faithful if true. Or as it's called in Nashville, "football season."

RETURN TO THE POSTSEASON 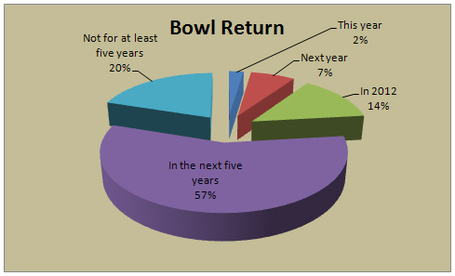 This one somewhat surprised me. Again, the votes were taken when Bobby Johnson was still going to be the coach, but I figured that pessimism about Vanderbilt's chances would give "Not for at least five years" more than a fifth of the vote. Put another way: More respondents thought the Commodores would play in the postseason by 2012 than thought it would take until at least 2015 to get there. Given that the gap between Vanderbilt's last two bowl games last more than a quarter-century, going once every five or 10 years is a step in the right direction.

It also might serve as a useful measurement for Robbie Caldwell's status in Nashville. After all, almost everyone believes that Bobby Johnson was one of the best coaches in recent Vanderbilt history. If it was going to take him a few years to get back to a bowl, maybe Caldwell should also be afforded a little time.