The TSK Team of the Year is the team or teams who most affected the SEC, for good or ill, and embodied what was important about the year.--Borrowed from TIME

What happens when greatness meets excellence? When a team on the verge of doing something not done in more than a decade plays a team aiming to achieve that same goal? And when everyone sees it coming from a mile away?

You get a season a lot like 2009. For this league, at least, it was a season defined by a game that seemed destined to be played from the beginning: Alabama vs. Florida, the SEC Championship Game. And while the predictions changed, while some shifted from calling a likely Florida win to an equally likely Alabama victory, the focus never changed. It was not only as important as we thought it would be. It was more so.

For the first time since 2006, an undefeated No. 1 would meet an undefeated No. 2 with the conference title on the line and a chance at the national championship as the major prize. And there was revenge in the air; after all, it was Florida who had ended Alabama's undefeated season in 2008 shortly before the Tide completely imploded against Utah in the Sugar Bowl. And Florida had gone on to celebrate the national title that Bama fans thought would be theirs, defeating Oklahoma in that year's BCS title bout.

It ended just as everyone thought it would. But the journey -- well, that was something else entirely. Both the journey and the destination defined 2009, and make it impossible to review the season of one of the two teams that formed that narrative without reviewing the other.

It's hard to remember now just how highly anticipated the 2009 season was for Florida fans. After all, Tim Tebow and practically the entire team was back from 2008, when a loss at Ole Miss launched a scorched earth campaign, with the team from Gainesville literally obliterating everything that stood between them and Atlanta. 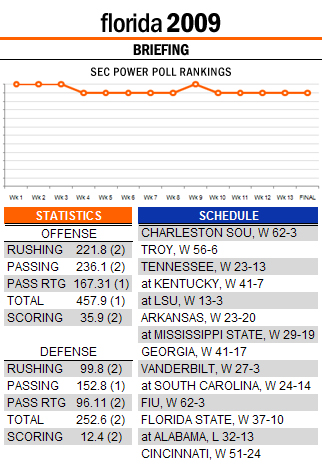 everything started out according to plan. The two cupcakes in the first two weeks of the season were easily dismantled, losing to Florida by a combined 118-9 score. Then, the train came off the rails the following week, and Florida never seemed to regain its momentum.

There was the "moral victory" for Tennessee, which lost only 23-13 despite billboard comments by new Vols head coach Lane Kiffin. Things seemed to be on the way back to the a second blitzkrieg through the SEC, as the Kentucky game shaped up early to be an absolute annihilation.

Then, defense end Taylor Wyndham hit Tim Tebow, knocking him to the ground. There was nothing wrong with the hit that Wyndham delivered, but there was something wrong with Tebow. He didn't move for a moment.

He was carted off the field. And Florida's season would never be the same.

Not just because the concussion seemed to coincide with a string of lackluster outings, whether it caused them or not. But because the two-week hand-wringing over whether Tebow would play in the next game, two weeks later at LSU, began what seemed to be an avalanche of drama for Florida: The officiating controversy in the win against Arkansas, the Brandon Spikes eye-gouging and subsequent self-supsension, Urban Meyer getting fined after criticizing officials, and the Carlos Dunlap suspension just before the SEC Championship Game.

Even if Florida had been waxing its opponents the way it was supposed to, it would have been an exhausting stretch. But Florida wasn't waxing its opponents the way it was supposed to. The Mississippi State game was an awfully close version of the 10-point win. A slighly more accurate pass on a critical drive by Stephen Garcia, and the Gamecocks have a good chance of taking the lead in that game. Even Vanderbilt only lost by 24 points -- in a season that was terrible by Vanderbilt's standards. I know some Florida fans had begun to wonder if it was all worth it, because they said so on this blog. 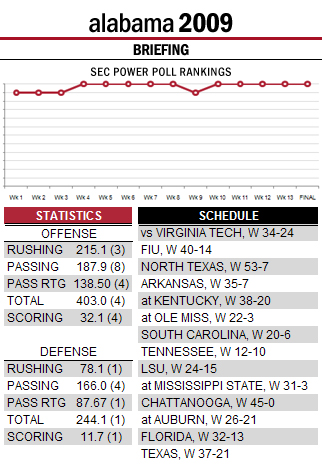 For its part, Alabama was doing just fine, thank you. There wasn't much drama in Tuscaloosa over the course of the season. Aside from the organic Heisman campaign that developed around Mark Ingram, questions about the winning play against Tennessee and a missed interception call for LSU near the end of that game, the Crimson Tide was largely able to play football. Sure, the expectations of its near-certain meeting with Florida were growing, but most of the media hype machine had already focused on the final season of Tebow as their storyline.

In fact, Alabama looked about like we all expected Florida to look in 2009. The Tide defeated Virginia Tech by 10, two cupcakes by a combined 72, Arkansas by 28, Kentucky by 18 and would-be division rival Ole Miss by 19.

By then, the offense had virtually disappeared, save Ingram. It was Ingram who almost single-handedly won the game against South Carolina, though Terrence Cody gets the credit for the victory against the Vols. Then it was a nine-point win against LSU and back to the leveling of opponents: 31-3 against Mississippi State, 45-0 against Chattanooga.

The season almost unraveled at Auburn before a late comeback saved the game. Then it was on to face Florida.

We all know, of course, what happened next. Florida seemed to almost literally collapse in the SEC Championship Game, and the most memorable moment for those who had come to dislike Tebow were the pictures of him crying as the final seconds ticked away from what was supposed to be a dream season. He would not lead a late comeback this year, would not save Florida's season. The winning streak, the dream of an undefeated season and a repeat national title -- they were all gone.

Florida, of course, had to watch one other drama play out: The stunning announcement by Urban Meyer shortly before the Sugar Bowl that he would retire. Here was the non-football story of the offseason, or so we thought; a coach with several years left voluntarily stepping aside in his prime.

And it would have been the story of the offseason -- even with everything that's happened since then -- if it had really happened. Within 24 hours, though, Urban Meyer had "detired" -- essentially telling everyone that he didn't want to retire, thought he might coach again and would instead take a leave of absence.

While the rest of us tried to get our heads to stop spinning, Florida did what it had done all season: Take the field despite having plenty of reasons not to. But Tebow and Co. would not be denied their shining moment, obliterating Cincinnati in one of the most convincing non-championship bowl victories in recent memory. (Between equals; otherwise, you have to go with Georgia-Hawaii, but that's like the Yankees facing the Royals.)

Alabama, meanwhile, prepared for its season-ending show, what would become a 16-point victory against Texas for the national title Tide fans had been awaiting for more than fifteen years, since Gene Stallings walked the sideline. Some Texas fans said then -- and will tell you to this day -- that the game would have been different had Colt McCoy not been knocked out of the game. But championships don't get decided on "ifs," and the rules don't change because of an injury.

So what do we take away from 2009, a season defined by two teams who ultimately did face each other as predicted after a season that turned all the predictions on their collective head?

Just that. That even the most obvious season has its share of surprises and that foregone conclusions are often less than foregone. In more simple words, there's a reason they play the games.

And even if there doesn't seem to be, there's a reason to watch them.