Share All sharing options for: Penalties Don't Matter Much

Penalties can be a big deal in certain circumstances. We all know this. A punt return touchdown is called back. A third down stop is negated by a personal foul. A kicker misses a field goal but someone runs into him, giving the guy another chance. Pass interference is called on fourth down in overtime of the national title game. Again: big deals.

On the whole, however, penalties don't matter much. It's something that I like to highlight once an off season because so many folks either don't know or immediately forget when their team loses a game in which it racks up 11 flags.

In general though, penalties are a mere annoyance to the best teams because they can be overcome relatively easily. To lower quality teams, they seem like killers even though the team wouldn't have succeeded anyway in a lot of the same situations. Let's go to the numbers to back this up. 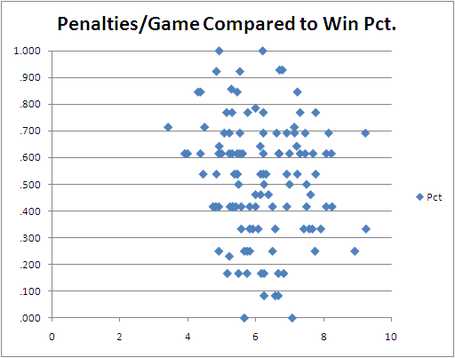 Now fortunately for all of us, the NCAA began adding stats on first downs at some point this year. As I said at the beginning, defensive penalties that cause the other team to get a first down is one of those situations where the penalty is unequivocally a bad thing. How does that compare?

That's not a whole lot, despite being the strongest influence on winning that I could find in any penalty-related stats. Again: situationally, penalties can be very bad. Overall, they don't matter much when it comes to winning.