To wrap this series up, let's take a look at the seasons with goose eggs. That's both in the loss column and in the win column. 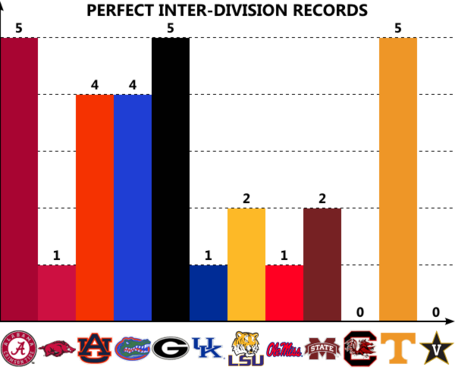 Alabama, Georgia, and Tennessee lead in this category by having five perfect seasons apiece. Florida and Auburn aren't too far behind. Only South Carolina and Vanderbilt have not gone a perfect 3-0 versus the opposite division.

Now for this purpose, I was only looking for perfect 3-0 records. If you're simply worried about records with no losses, then add one to the counts for Alabama, Auburn, and Tennessee as each had a 2-0-1 season before ties were put to rest by the NCAA for the 1996 season.

Now on to winless seasons. In the following graph, each dashed line represents a unit of three instead of one. You'll see why. 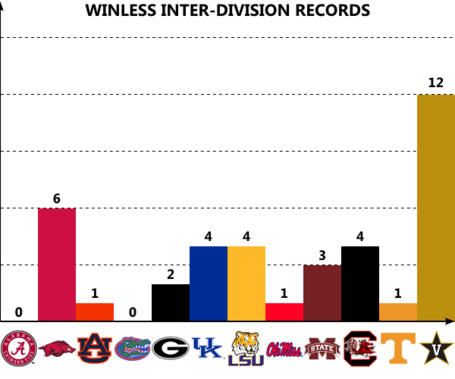 Only Alabama and Florida have avoided being shut out by the opposite division, and Auburn, Ole Miss, and Tennessee are right there behind them. In fact, Tennessee picked up its first winless season against the SEC West just last year. It's another little present that Lane Kiffin left behind in Knoxville. As for Arkansas, I still don't know if I can fully explain its troubles against the East.