Share All sharing options for: SEC 2010 // Looking Back: Auburn Has an Odd Season

Consider a team that, in the space of two months, lost by three touchdowns each to Arkansas and LSU, lost 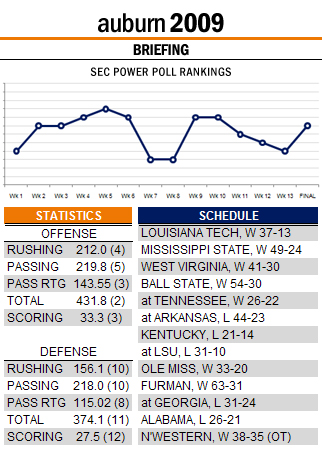 When you study the story of Auburn's 2009 season, though, you come to the same not-very-revelatory conclusion: The defense was really very bad. Not epically bad, but bad.

Auburn did hold one team to fewer than 20 points all season long. One team. And that wasn't even the FCS team on the schedule, but Louisiana Tech. (Good thing Derek Dooley gets a few years before he has to face Auburn again.)

In fact, look again at the teams that scored 30 or more against Auburn: West Virginia, Ball State, Arkansas, LSU, Furman, Northwestern. If you can find me a rhyme or reason to that list, you're a better analyst than I.

Of course, some of that is to be expected when a quick-strike coordinator like Gus Malzahn is calling the plays. The defense doesn't get quite as much time to rest, there are potentially more possessions for each team, and you try to score 50 so it doesn't matter if the opponent scores 30. The problem, of course, is that you can't score 50 in the SEC every week. Sometimes, you're doing good to score 20.

Which is not to say that a balancing act can't be found by Auburn. Gene Chizik was a national-championship winning defensive coordinator. But so far, that skill set hasn't transferred to any of his seasons as head coach. Teams that scored 30 or more against him at Iowa State: Toledo, Nebraska (2), Texas Tech, Texas, Missouri (2), Kansas (2), UNLV, Baylor, Texas A&M, Oklahoma State and Kansas State. Sure, he has better talent at Auburn than he had at Iowa State. How many SEC offenses will he fact that have as little talent as UNLV?

That has to change if Chizik's going to have success at Auburn. Because every once in a while, your offense is going to have a bad day against Kentucky or LSU. The other teams in the conference do know how to play defense, after all.

Then again, you can just go through one very odd season after another.