How many ways can you say that the Georgia defense was terrible last year? It's hard enough not to beat dead horses into the ground as we review last season to get ready to preview the next one -- but Georgia's season of defensive fail has been document, redocumented and then re-redocumented to make sure that posterity never forgets just how bad the squad was.

Except -- hold on a minute. Maybe it wasn't quite as bad 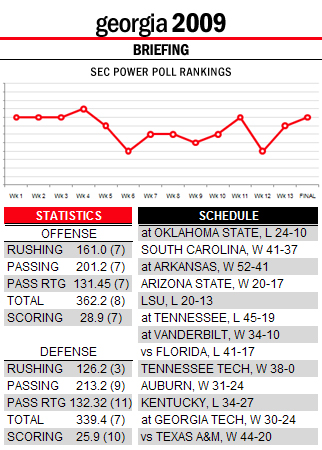 First, Georgia lost a conference game in which it held the opponent to 20 or fewer points and lost the opener at Oklahoma State despite holding the Cowboys to 24 points. You can argue how "winnable" those games were, especially when you have a quarterback playing halfway across the country in his first season as a full-time starter and your team has just lost RB Knowshon Moreno. And the LSU game was marred by controversy and questions about whether the points that were scored were on good plays by the offense or bad plays by the defense.

But Georgia's defense was not historically bad on the whole. It just had some very, very bad games. Allowing 37 to South Carolina is jaw-dropping in retrospect. (Even at the time it was odd, given that the Gamecocks had been part of an almost unwatchable game against N.C. State the week before.) The 45 points against Tennessee was unbelievable then and still is now. (The Vols were good on offense, but not that good.) The 41 points against Florida -- well, that's what happens when Georgia plays Florida. But 34 points against Kentucky at home is the kind of thing that gets defensive coordinators fired.

And that's part of the problem Georgia had last year. Unlike LSU, teams on average did very well at turning yards into points against the Dawgs, whose seventh-ranked total defense allowed the third-most points in the league. A good deal of that blame has to fall on the secondary, which was far worse than the run defense. (Then again, when the pass works that well, why run?)

The truth is that the Georgia offense also wasn't blowing anyone's doors off -- with the exception of Georgia Tech and Texas A&M, at the end of the year, and Arkansas and South Carolina, the latter in what has to be described as the most significant statistical outlier of the season. In the Arizona State, LSU, Tennessee and Florida games -- a critical stretch of the season sans the Vanderbilt game -- Georgia scored 66 total points, an average of 16.5 a game. In total yardage, the offense ranked eighth in the league. When the games were the most important, the defense often disappeared, but the offense never really showed up.

So what do we make of the last five games, when Georgia scored 27 or more points in each contest? Was it just the result of playing an FCS team and some FBS teams that were hardly the cream of the defensive crop? Or was there a true renaissance?

And if so, can Georgia carry any of that momentum into this season? Because while saying goodbye to Willie Martinez will almost certainly help the defense, that was far from the only side of the ball that needed improvement in 2009. And will need improvement if the Dawgs are to rejoin the ranks of the SEC elite in 2010.