SEC 2010 // Looking Back: Arkansas Tries to Win With Half a Team

Share All sharing options for: SEC 2010 // Looking Back: Arkansas Tries to Win With Half a Team

What happens when you only have half a football team? Arkansas tried to find the answer last year, and ... well, It depends on what you think about playing East Carolina in the Liberty Bowl.

Ryan Mallett broke most of the records for a quarterback at Arkansas, setting season highs in passing attempts 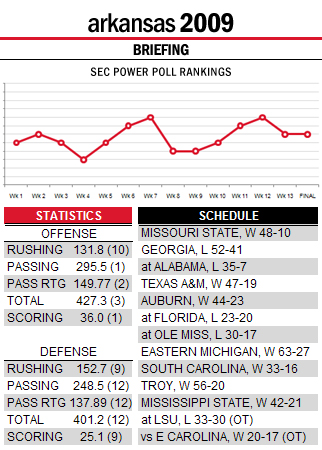 (403), completions (225) and touchdowns (30); breaking the single-game record for passing yardage with 408 against Georgia (and then passing for what would have been the record with 405 against Troy); then breaking the record for touchdowns in a game with five against the Dawgs, then tying that record against Troy and Mississippi State. All that while throwing just seven picks. Sure, the Razorbacks didn't have much of a rushing game, but you don't need one when the quarterback is bombing opponents into oblivion.

That said, at least three of Arkansas' losses were team efforts. Seven points isn't going to win many football games, the 17 against Ole Miss don't strike you as a chance that the defense ruined and we all know what happened against Florida. Had Arkansas scored its season average in four of its five losses, they would have been wins. And the defense did well in some games, holding Texas A&M to 19 points, Auburn to 23 and Mississippi State to 21. (It also stopped Steve Spurrier's new offensive system: "Get to the red zone, fade to Alshon.")

But that's the problem with a team like Arkansas in 2009: When the points aren't raining down from the sky, you can't win. Before the bowl game, Arkansas had not won a single game in which it scored fewer than 33 points, and all but one of its regular season wins included at least 42 offensive points. You're not going to score more than 30 points every week in the SEC, and 40 a week is out of the question.

Consider, though, what Arkansas would be like if they could get a defense. The Razorbacks were seven points away from a nine-win regular season and a chance at a 10th in a much better bowl game. Will Arkansas allow 50 points again to Georgia? Unlikely. Will Gary Crowton's offense ever score 33 points against any SEC defense, ever? The question almost answers itself.

That's part of why Arkansas is seen as a potential surprise team in the SEC this year: The defense almost has to improve, if for no other reason than the fact that it can't get any worse. And that improvement will lead to at least a couple more wins, putting the Razorbacks in the middle of the race to be Alabama's strongest challenger.

What if the defense doesn't improve anyway? Well, Memphis isn't that bad in January.