Charting How Bad the SEC Championship Game Blowout Was

Share All sharing options for: Charting How Bad the SEC Championship Game Blowout Was

Note: I appreciate all feedback, but I am out on vacation this week and will not be able to respond to any comments or questions. Thanks for understanding.

The SEC Championship Game caught everyone by surprise last year. Not by its participants, of course, but by the outcome. Florida looked like it was in a daze and Alabama dropped the hammer on the unprepared Gators.

Just how out of character of a performance was it for Florida's defense? Remarkably so: 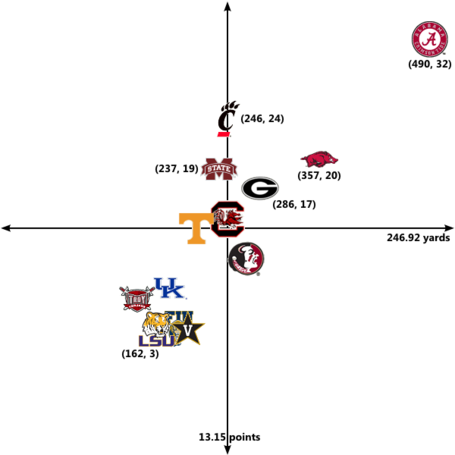 This chart shows all the UF defensive performances on the year (except Charleston Southern, because no one cares). The 490 yards and 32 points that Alabama put up that night were far beyond the usual totals allowed by last year's Florida defense. Cincinnati, Arkansas, and Georgia all had pretty good offenses (better than Alabama's by some measures), but there was a distinct limit to what they could get. LSU perhaps had the worst offensive performance against Florida (largely because there was no garbage time in that game to rack up stuff on the backups), but it was not as far below average as Alabama's was above average.

In fact, the points and yardage that Alabama got were both more than two standard deviations above the mean for the season (again, with CSU thrown out). It just goes to show how out of it Florida was that night, and how ready, willing, and able Alabama was to take full advantage of it.