The Legacy and Legend of Bobby Johnson

Share All sharing options for: The Legacy and Legend of Bobby Johnson

In what has already become the most bizarre SEC offseason in recent memory, the most unanticipated move came from (perhaps fittingly) the least like source: Bobby Johnson.

After, the Vanderbilt coach was widely known as one of the most buttoned-down and predictable of the SEC coaches. Johnson never does anything unexpected. (Just ask any of the league's defensive coordinators.) And then he retires in the middle of July, less than a week before SEC Media Days, and throws everyone for a loop. Is something in the water?

And even if a few people here and there have questioned whether Johnson should have left his team in the middle of the summer, just seven weeks before they are set to take the field, the reaction has been almost universally respectful to one of the classiest coaches in the league. Anyone who lives through eight years at Vanderbilt without going insane or murdering someone deserves that much, and probably more.

But then we get to the football question: How good did Bobby Johnson do at Vanderbilt? It's not that easy a question to answer; anyone coaching the Commodores has to be graded on a fairly steep curve, given the futility in Nashville that is going on 60 or 70 years now.

By all signs, Johnson had the Commodores moving in the right direction. He won two games in each of his first three seasons, something he's done only once beginning in 2005. Last year marked Johnson's first winless SEC season since his first year in Nashville and the first time he hasn't won at least one game in the SEC East since 2004. And this in a year that was almost bound to see the 'Dores fall back to Earth, given the insane luck they had in the bowl season of 2008. (Something to which Bobby Johnson and the story-happy SEC media seemed oblivious in July.)

One of the things that escapes mention, though, is that Bobby Johnson still didn't have a great overall record. Even for Vanderbilt coaches of the last half-century or so, he's pretty average.

But one of things you'll notice in this chart: None of the coaches who did better than Johnson (save Gerry DiNardo, who turned his success into a job at LSU; ask Tigers fans how that went) started coaching after 1985. In other words, he's easily the second best of Vanderbilt's last five coaches. (And that's not allowing for what might have happened had DiNardo stayed -- really, ask LSU fans.)

In fact, Johnson took over after Widenhofer's last team went 2-9 and began ever so slowly turning the Commodores around, taking them back to the team's historic average over the last half-century or so. That might come as a bit of a shock to those who haven't looked into SEC history too much -- Vanderbilt's historic average wasn't 2-9? -- but Johnson took a woeful team and turned it into a competitive one. 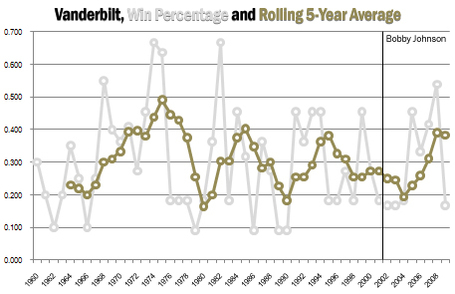 This is the classic rebuilding path, at least the classic sustainable rebuilding path -- a few bad seasons to begin with, and then gradual progress. Johnson was doing that, with the five-year rolling average winning percentage ticking upward in his fourth season and continuing to progress until last year. And even with the two-win season in 2009, Johnson still leaves the Vanderbilt program in far better shape than when he took over.

Even so, that last season had to be a kick in the gut. And while he probably didn't have a graph like the one above, he might have sensed that he had peaked. At Vanderbilt, 59 years old -- where else was he going to go? If he sensed it was over, sensed he had done all he could for the Commodores, maybe the best thing to was retire, especially once he knew his staff would be safe. (HT: Vanderbilt Sports Line)

But I still can't get one incident out of my head: The anguished look on Johnson's face as he spoke to the media after the death of Rajaan Bennett. That kind of a tragedy would make any of us re-evaluate our lives, and maybe the senselessness of it all was something that years and years of losing at Vanderbilt were not.

Maybe it was just too much.