SEC 2010 // Looking Back: LSU Switches Its Ray Gun from 'Mediocre' to 'Thoroughly Mediocre'

Share All sharing options for: SEC 2010 // Looking Back: LSU Switches Its Ray Gun from 'Mediocre' to 'Thoroughly Mediocre'

If you just looked at the trend line on LSU in the SEC Power Poll -- and give our voters the benefit of the doubt that they know what they're talking about -- it would be hard to classify LSU's season as a disappointment. See how high they are, and how high they remain. Always the third- or fourth-best team in the league, and considered the third best for nine of 14 polls. That's quite a run.

Then why does it feel like LSU followed up what I classified as an "average season" in 2008 with another largely average season in 2009? Part of it is the "gooey middle" that we keep talking about in the SEC: There was a chasm 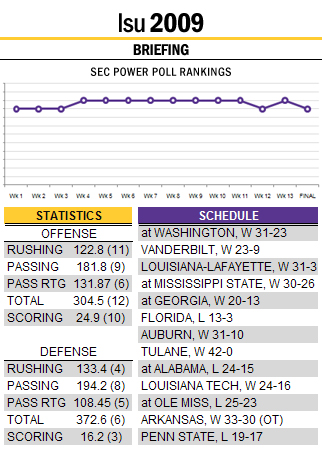 between Alabama and Florida and everyone else in the league, and that includes the No. 3 or No. 4 team -- in this case, LSU.

But also -- look at LSU's results for 2009. Wins against Washington, Vanderbilt, Mississippi State, Louisiana Tech and Arkansa fell into the "mediocre" or worse category. The Georgia win was marred by one of the worst calls in a long list of awful decisions by SEC officials. The Florida loss was a display of offensive ineptitude almost unrivaled in recent history. (LSU gained 162 yards. Total.) Aside from a three-touchdown win against Auburn, the Bengals did very little that was that impressive. They still ranked high in the SEC -- because no one else did anything really impressive, either -- but that doesn't mean the Tigers were all that good.

For his part, first-year LSU defensive coordinator John Chavis actually improved some areas of the defense, though results were mixed. But the offense, average among the SEC in 2008, cratered in 2009. Only the passer rating of Jordan Jefferson and Co. ranked outside of the bottom quarter of the SEC. If Chavis' defense hadn't somehow managed to turn the sixth-ranked defense in terms of yardage into the third-ranked defense in terms of points, LSU's season could have been much different, and perhaps even more mediocre.

The biggest question about 2009 -- and the one we can't answer right now -- is this: Was this the second year of a down period that will pass, or the second year in the Larry Coker-ization of Les Miles? The parallels are more surprising and striking that you might think. Here are Coker's records at Miami: 12-0, 12-1, 11-2, 9-3, 9-3, 7-6. Miles so far at LSU: 11-2, 11-2, 12-2, 8-5, 9-4. At some point, the Miami "talent machine" became a myth or the coaching was either worse or could no longer be improved by talent. The dramatic fall-off began in the fourth year under Coker -- when many of Butch Davis' recruits were gone. So far, the LSU "talent machine" is the most cited reason to continue to rank LSU in the Top 25 in the preseason. Even after the dramatic fall-off began in the fourth year under Miles -- when many of Nick Saban's recruits were gone.

Of course, history does not always repeat itself quite so neatly. If Miles and the Tigers put together a 10-win season this year, or even a more impressive nine-win season than in 2009, then we can officially forget this talk about Miles being Baton Rouge's answer to Coker. But there would be precedent for LSU making a bowl by the slimmest of margins. If that happens, Miles will likely find himself following Coker's career path in one other particular.

Unemployed after his sixth season.