Sure, that sentiment's a little self-serving, but it's about 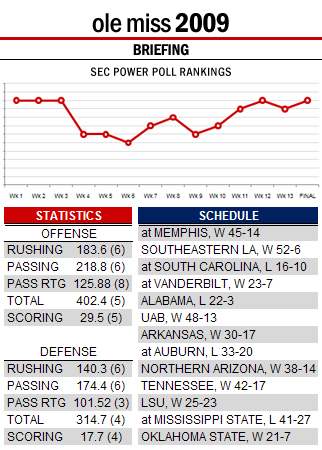 the best peg I have on which to hang any review of the 2009 Ole Miss Rebels. Because otherwise, I'm just left with: Meh.

The truth is, the Rebels last year weren't a very good team. Of course, they also weren't a bad team. After all, they did end up ranked third in our final SEC power poll of the season and a respectable No. 20 ranking in the last BlogPoll of the year.

But look at the actual numbers, and things get a little more ... complicated. Of the 11 FBS teams the Rebels faced, they defeated seven of them -- which isn't bad, but also isn't anything to write home about. They were 5-4 against BCS-league teams. Their best wins are against Tennessee, LSU and Oklahoma State; their worst losses are against South Carolina, Auburn and Mississippi State(by 14!). Which if you had started out the season as South Carolina, still would have been a pretty good season.

Instead, Ole Miss started out the season as one of three favorites for the SEC Western Division title, and while two of those teams were almost bound to underwhelm given simple math -- boy, Ole Miss really outdid itself. A 16-point win against Vanderbilt -- in a year when the Commodores were bad by their standards? And anyone who saw the season-opening "victory" against Memphis knows that the actual margin in that game was far smaller than 31 points. Meanwhile, the Rebels were the only SEC team -- the only one -- to score 20 points or less against Auburn. (In fairness, Kentucky, Tennessee and Mississippi State scored 21, 22 and 24 respectively. But if you had told Ole Miss fans before the season that they were going to be outscored against Auburn by Kentucky, Tennessee and Mississippi State, I doubt the margin would have mattered a great deal.)

So given that, and given that Jevan Snead decided he would get out of Oxford while the getting was good and Dexter McCluster is also gone, what can we take away from the Ole Miss of 2009?

First, that Tyrone Nix is perhaps not as bad as his pre-Ole Miss critics would have you believe nor as good as those now calling him "one of the best in the business" would tell you. His overall numbers were pretty good, but when it comes to yardage in the rushing or passing game individually, they're mediocre. Aside from the Mississippi State loss, though, he really didn't allow an eye-popping number of points to anyone. (The 33 against Auburn is reasonable enough.)

Second, Houston Nutt's penchant for conservativism wasn't out of control this year. The team was about middle-of-the-league in both the running and passing department and actually put together a pretty good overall yardage total. Again, nothing great, but this wasn't exactly three yards and a cloud of field turf. Whether that will continue with Snead gone and whether it should continue with Snead gone are legitimate questions.

Finally, it shows that it's going to be hard for this team to break through. Maybe not impossible, but difficult. Because Ole Miss finally seemed to have that shot in 2009 at going to Atlanta and a chance to play for the league title. And they didn't just miss -- with a 4-4 SEC record, they missed by a mile.

So we all have good reason for feeling a bit "meh" about Ole Miss last year and what it means for 2010. Then again, you know what they say about Houston Nutt when expectations are low ...