Phil Steele's All SEC and All Americans

Share All sharing options for: Phil Steele's All SEC and All Americans 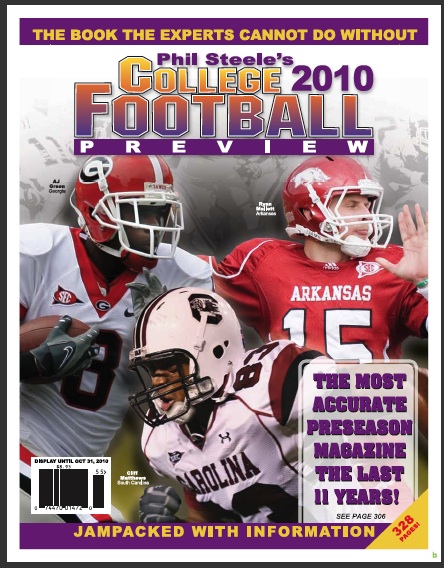 This is the general SEC cover. The state of Florida and Alabama/Auburn get their own covers. See all of them here.

Phil Steele has sent out his lists of All Americans and all conference teams to the various schools. He's going to announce them one-by-one on his web site over the next few days, but why wait? Let's look at them now.

The All SEC team can be found here. There weren't too many surprises, though the running backs puzzled me a little bit. Derrick Locke got first team honors ahead of Washaun Ealey, while South Carolina's incoming freshman Marcus Lattimore got third team ahead of last year's SEC Freshman of the Year Warren Norman.

On defense, Florida's Omar Hunter being second team defensive tackle makes no sense given that he's still second string on his own team right now (and the guy he's behind is not on the first team). I'd also argue for a first team spot for Vanderbilt's LB Chris Marve, seeing as how he led the conference in tackles last year, but I'm not sure who I'd bump down to second team. Probably Auburn's Craig Stevens.

Anyway, here's the SEC players on the various teams of All Americans. Steele didn't send out his top 25 like Lindy's did, so we'll have to wait for that for a while yet. Steele's magazines hit newsstands (hard) on June 8.

In all, that's four for Alabama, two for Arkansas, one for Auburn, four for Florida, five for Georgia, two for LSU, one for Ole Miss, one for South Carolina, and one for Tennessee. Any of you have Georgia as your pick for most total Phil Steele All Americans?