SEC 2010 // Looking Back: Kentucky Turns the Page, But Still Must Turn the Corner

Share All sharing options for: SEC 2010 // Looking Back: Kentucky Turns the Page, But Still Must Turn the Corner

To some extent, I'm still trying to figure out how Kentucky leap-frogged South Carolina in the final SEC Power Poll after losing to a team in its bowl game that South Carolina waxed in its final regular-season game. But even that controversy points to how tricky the Wildcats were to tie down in 2009 and how to factor that in as we head into 2010.

This is, after all, a team that got annihilated at home by Florida, lost to South Carolina, defeated Auburn on the road, 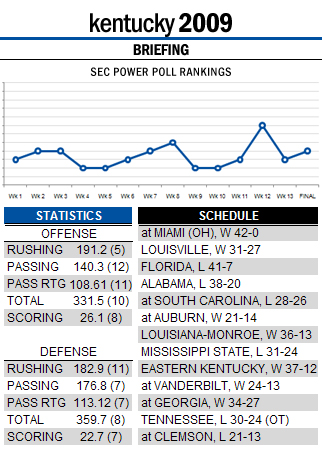 lost to Mississippi State and then defeated Georgia in Athens. In a year in which the middle of the SEC seemed to consist of a set of seven or eight interchangeable teams, Kentucky was one of the most confusing of the group.

And the numbers back that up. Rushing offense is the only major statistical category in which the Wildcats cracked the top half of the SEC -- presumably in part because the passing offense was no sure way to move the ball. Kentucky was outgained on the year in total offense, though the Wildcats did actually outscore their opponents -- narrowly, by slightly more than a field goal a game.

So how did Kentucky end up even a 7-6 team? Part of that, of course, is Rich Brooks' tried and true method of following the Kansas State School of Scheduling: a neutral site game "at" Miami (OH) and home games against Louisiana-Monroe and Eastern Kentucky were the core of the non-conference schedule, with the only BCS league team being rival Louisville -- which was only a BCS league team last year in the sense that it is a team and it played in a BCS league.

To sum up the concern that Kentucky fans should have after 2009: How often since Andre Woodson left have you felt like the Kentucky offense was a force to be reckoned with? Even with the bowl loss to Clemson factored in, Kentucky scored more than nine points more in non-SEC games than in league contests (31.8-22.5) last year; and while scoring 23 ppg in the SEC is no easy task, it's also not the stuff championship offenses are made of.

And the new head coach of Kentucky this year is ... Joker Phillips. That's not to say that Phillips won't succeed as a head coach. Indeed, sometimes great coordinators make mediocre head coaches and average coordinators make solid head coaches. And it's not like Kentucky's defense was rock solid when it faced great or even average offenses: Florida scored 41, Alabama rang up 38 and South Carolina scored 28 -- the Gamecocks' second-highest score against any SEC team and 12 points more than the third-highest.

No, 2009 was just like any other year with Rich Brooks at the helm in Kentucky: A superior job of a veteran coach wringing the most wins out of a team facing historical and talent disadvantages in a high-quality league. Phillips' challenge is to continue that trend and, perhaps, build on it.