Share All sharing options for: Sprints Is Talking About Kentucky and Softball // 05.17.10

It's Kentucky week
Break out the cupcakes but retire the old man jokes -- we're previewing the Kentucky Wildcats all week long. It will be a streak -- [Ed.: Um, let's avoid that word when talking about UK] -- I mean, a series of posts about Big Blue's chances now that Rich Brooks has moved on. 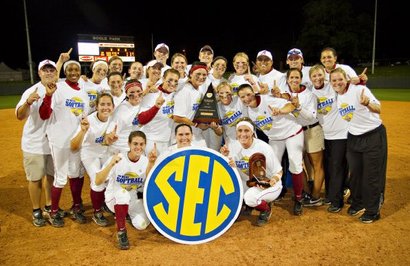 Football = softball?
At least in terms of the best conferences, it seems. Alabama is the No. 1 seed after winning the SEC tournament, leading a sizable league contingent in the national bracket.

The Big 12 Conference, the Pacific-10 Conference and the SEC led all conferences with seven teams in the championship.

We all owe an apology to Bobby Petrino
Not for making jokes about him leaving Arkansas -- those are still funny -- but for any notion that remains that he is the most cold-blooded coach in the SEC in recent history. Lane Kiffin has won the honor and deserves most of the anger that comes his way (not the threatening text messages or anything, but all of the rest of it.) His take on leaving Tennessee?

"I never once told any of those players I would be there forever," the former Tennessee football coach told HBO's Real Sports in an interview that will air on Tuesday. "I never made the statement 'I was coming here; this is my dream job.' " ...

"It's part of the business," Kiffin said. "As they get older, they understand. That's why they put buyouts in contracts."

It's tempting to make some comment about how small a person one would have to be to make statements like this. But Kiffin has finally proven that he's no longer worth commenting on.

VOTE NOW
Now is as good a time as any to remind you to vote for Lane Kiffin to be Esquire's Sexiest Woman Alive. He's still trailing by 18 points.

The loyalty of a humanitarian
Kentucky head coach and noted humanitarian John Calipari has tried to quiet the speculation about his going to the NBA through his Twitter account. Because you can always believe what you read on the Internet. (Wikipedia says Barack Obama was born in the Czech Republic, so it must be true!)

Calipari sent a message on Twitter on Friday morning that said, "I want to address this with the Big Blue Nation one last time, I will be coaching at Kentucky next year. Now let's finish what we started!"

He added that, "I've said many times that I've got the best job in the country. Still the speculation runs wild and I can't stop that."

That part we know is probably true: Calipari can't stop any speculation, particularly from NBA general managers trying to convince their fans that they searched far and wide for the best coach. But he could have ended the story earlier by making a non-equivocal statement days ago.

Saban doesn't back SEC expansion
And, really, why should he? The conference is working for him right now.

You've got some saying the SEC should expand, that it would do well to add Miami and Florida State. To me, that doesn't make sense. We've already got Florida.

Ah, but think of it, coach: With Miami, the SEC could easily win the Fulmer Cup every year.

You can go to a potential Big East champion or a potential SEC East 4th place team. In other words, no difference
Joker Phillips and Charlie Strong work to win over Louisville-area recruits.

Jacksonville also in running for Alabama neutral site game
It's not just Atlanta and Dallas, apparently.

Ole Miss is asking for your ideas about a mascot
You're welcome. (HT: Brandt)

The key question is whether they can keep Utah, TCU and BYU
The Mountain West appears ever more likely to invite Boise State.