Share All sharing options for: Sprints Urges You to Vote Lane Kiffin the Sexiest Woman Alive // 05.13.10

YOU MUST VOTE RIGHT NOW
Time is running out in the quest to make Lane Kiffin the Sexiest Woman Alive. He's trailing Heather Mitts badly -- which is understandable, given that Ms. Mitts is an attractive woman. And nothing personal, Heather, but this is business. 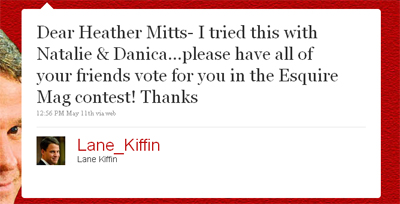 I've got a better idea -- get rid of one of the dumbest rules in college football
The SEC is set to continue its mindless jihad against artificial noisemakers like the Mississippi State cowbells. It's a football game; there's a decent chance it's going to be noisy. Let the artificial noisemakers back into the game.

Dawg fans -- rejoice?
Logan Gray will not transfer. So you won't be losing your primary kick returner.

Twitterer of the Year shuts down Georgia tweets
Mark Fox might need "to focus on the team" as well.

Hix said that Georgia players won't be tweeting much in the future because Fox has instructed them not to. He believes that recent tweets from Trey Thompkins and Travis Leslie had been "about themselves and just a bunch of nonsense."

Which is a perfectly understandable use of Twitter. Listen, I'm aware that there's a generation gap here. But you would think that someone who uses Twitter would realize how ridiculous this is. Posting 140-character tweets is going to take up hours that these players could be using for practice instead. How is it that the "Twitterer of the Year" can be so dense?

The Road to Omaha might not go through Baton Rouge this year
At least not after the regional round. Nonetheless, a good primer on LSU's baseball legacy from And The Valley Shook.

Vanderbilt defeats Louisville in 17-inning epic
A nice win for the Commodores, who else raised more than $21,000 to help after the Nashville flood.

The most important man in Oklahoma State athletics speaks about conference realignment
T. Boone Pickens isn't eager to join the Big Ten or any other conference. Either that, or he's acting like your grandfather when he's tired of waiting for a decision on where the family is going to dinner tonight.

"Back there, I could see if we did not get into a serious football program that we were going to be left at the post," said Pickens, who was named to the National Football Foundation and College Hall of Fame national board of directors earlier this year.

"I could see those that were struggling and I didn't want to be one of those."

"Besides," Pickens added, "if you really want the Big Ten, I can just buy it."

Missouri would listen
In fact, the Tigers are doing everything short of inviting themselves into the league.

Wow. Craig James is just ... wow
As if it weren't bad enough that he's going to broadcast Big 12 games despite being in a legal battle involving a Big 12 team, Craig James is showing that he might just be as stupid as he sounds.

ESPN's Craig James said he encouraged Randy Shannon not to sign an extension and gamble that he would help his bargaining position next season, the final year of his contract.

Um, Craig -- you know that they can give him another contract extension next year, right? In fact, that's generally how things work in college football. Something you might want to know, seeing as how you're a college football analyst. (HT: Blutarsky)