At South Carolina, One More Next Year

Share All sharing options for: At South Carolina, One More Next Year

Even for a South Carolina fan like your humble correspondent, it can get a bit boring writing wrap-ups of South Carolina's football 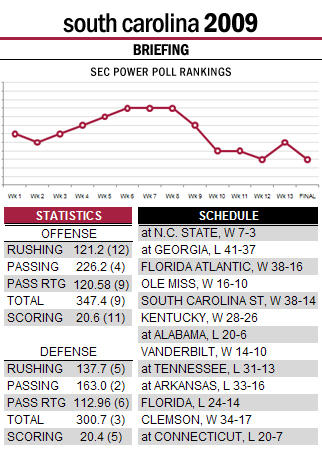 seasons. The refrain is always the same: It didn't work out this year for Steve Spurrier in Columbia, but next season looks like it could be the one.

And here we are again.

The defense under Ellis Johnson should still be one of the most underrated in the league and among the top half of those in the SEC. The offensive line should be better if for no other reason than -- short of a 2008-style apocalypse -- it will be difficult for it to be any worse. And quarterback guru Steve Spurrier still has the talented Stephen Garcia to work with.

"A backup?" Spurrier said. "We're looking for a guy who can carry us all the way through. I'm hoping Stephen Garcia will have a big summer of getting committed to really learning how to play. ... We've got to get Stephen ready to play.

Any South Carolina fan, as well as any Florida fan, can tell you it's difficult to know when Spurrier is speaking honestly about his quarter band when he's playing head games. So it's tempting to write off the comment as trying to keep the undisciplined Garcia on his toes -- unless you've watched Garcia play. Yes, there are the odd breakthrough performances, strings of 300-yard games and the like. There are also the infuriating mistakes and the off-days that make Garcia seem like a worthy heir to Spurrier's first signal-caller at South Carolina, the infamously erratic Blake Mitchell.

But after five years in Columbia and nothing better than a Liberty Bowl ring to show for it, it's fair to ask if Spurrier has simply run out of time. Coaches don't generally make huge strides at a program after their fifth year. A former bottom-dweller like South Carolina might prove to be the exception, but each year of 7-6 records featuring a sub-.500 November and a loss in a mid-tier bowl makes it harder to avoid a sense of stagnation. Which makes recruits more hesitant about going to Columbia to play for the formerly brilliant coach. Which makes it harder to regain the momentum that seemed to be on the Gamecocks' side after their win against Houston at the end of the 2006 season.

If there were a prescription for South Carolina in 2010, it's the same as it was in 2009 and 2008: Improve the offensive line in almost every facet of the game, both in creating lanes for running backs and in protecting the quarterback. (The Gamecocks "improved" from allowing 39 sacks in 2008, tied for 111th in the FBS on a per-game basis, to 37, tied for 105th, in 2009.) Guide Garcia as he improves from a quarterback who has flashes of brilliance to one who can be consistently good for four months. And find a way to avoid the late-season slide that has nixed South Carolina's hopes dating back to the Holtz Era.

None of this changes the fact that, as we've noted here before, Spurrier is still the best South Carolina coach in at least 50 years. But if he wants to add anything more than that to his resume in Columbia, he had better start soon.

You only get so many next years.