Jeremy Fowler of the Orlando Sentinel and Ben Volin of the Palm Beach Post are reporting via Twitter that a UF spokesman gave them additional information. Edwards' move "surprised" the rest of the coaching staff, and Steve Addazio and not Urban Meyer will coordinate the search for a new coordinator. Volin additionally reports that the spokesman said Edwards' move "happened quickly."

It's likely that one of two things happened here. One is that the school knew about this before NSD and worked out a deal with Edwards so that he would wait to go until after. The other is that the school didn't know, and either Edwards himself waited to leave until after NSD or Gailey waited until after to extend a job offer. Both scenarios are plausible, but it's highly unlikely that any recruits knew about it before yesterday. New UF signee DE Lynden Trail commented on the situation to the Miami Herald, and he doesn't seem to have had any knowledge of the move until this afternoon.

After roughly a month on the job, Florida defensive coordinator George Edwards is taking the same job with the Buffalo Bills. New Bills head coach Chan Gailey had Edwards as an assistant when Gailey was head coach of the Dallas Cowboys, so the two have a history. Gailey also attended UF, so he's screwing over his alma mater with this hire. Looks like Urban Meyer's leave of absence is beginning with another defensive coordinator search.

At first, I was a bit suspicious of the report because ESPN, who broke the news, had fact errors about Edwards' experience in its writeup of the story. I knew for a fact that Edwards wasn't a UF coach the last five seasons. I went to Edwards' Wikipedia page as a quick reference while also searching for his bio on GatorZone, UF's official athletics site, and I found where those errors come from. The section in question from ESPN:

Edwards coached the defensive line for the Dallas Cowboys in 1997 before moving to the Washington Redskins from 1998-2002 to coach the same position. He was the Cleveland Browns' defensive coordinator in 2003. He coached linebackers for the Miami Dolphins in 2004 before accepting the linebacker job at Florida from 2005-09.

Here's what the sidebar on Edwards' experience from Wikipedia looks like, with lines drawn to show the proper delineations: 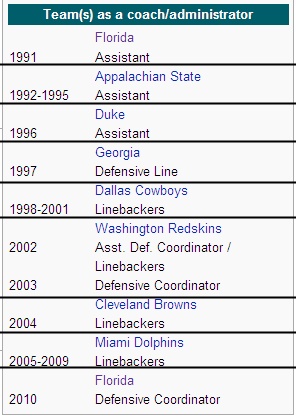 It's a somewhat confusing graphic, since the years line up with the position and not the employer. However, this information is correct and matches the bio information on GatorZone. It also matches the Wikipedia article text.

However, if you quickly scan the thing and interpret it incorrectly, the information morphs into this: 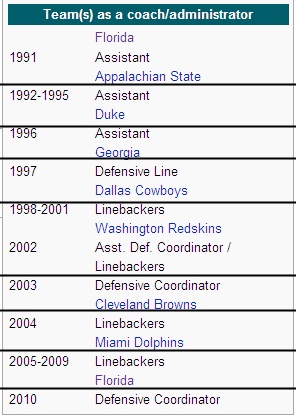 DL coach with Dallas in '97, Redskins from 1998-02, DC with the Browns in '03, linebackers for a year with Miami, and then linebackers at Florida from '05-'09. That matches the text from ESPN's report. I guess John Clayton, or whoever wrote this for him, can't read Wikipedia infograms. Even worse is this line from later on:

Apparently, Edwards was coaching in both Dallas, TX and Athens, GA in 1997. He's an even more remarkable coach than we all thought. In case ESPN updates the site to include accurate information (which it really should), here's a screenshot of the original article text. For shame, WWL. 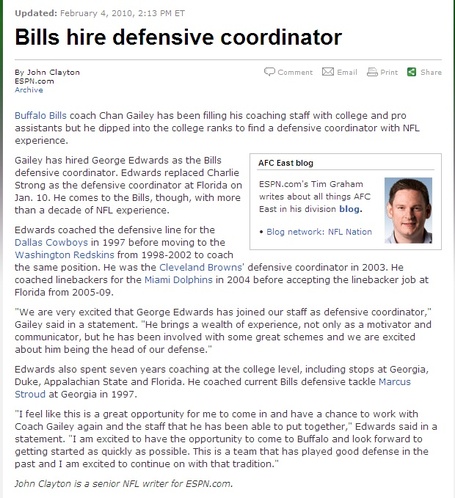