National Signing Day in the SEC: The King Is on a Leave of Absence! Long Live the King!

Share All sharing options for: National Signing Day in the SEC: The King Is on a Leave of Absence! Long Live the King!

In lieu of Sprints, because there really was little non-Wilcox news yesterday aside from recruiting.

Returning for the second year -- which means we can now officially call it annual -- is our Team Speed Kills 12, where we take a look at how the recruiting services ranked the SEC programs in terms of points and averages. For our methodology, go here. Behold: CHARTAGE! 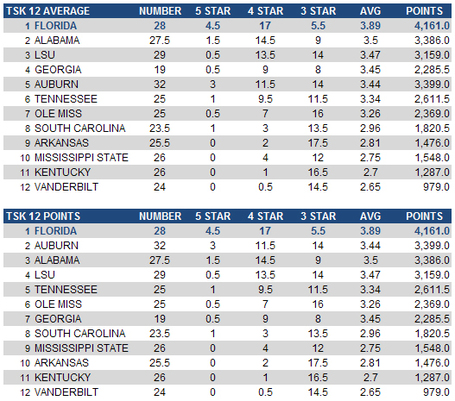 An additional caveat this year: Having almost run out of things to disagree on, the recruiting services (Rivals and Scout) this year managed to differ on how many recruits some schools got in terms of commitments. Since it's almost impossible to disaggregate the number of stars and points from the number of recruits overall, the size of the class has also been averaged here. Alabama did not sign a three-foot-tall torso and head to play center.

What does this tell us?

FLORIDA IS BEST BY FAR

This one isn't even close. In average points, Florida is almost as far ahead of No. 2 Auburn as the Tigers are ahead of No. 5 Tennessee. What's mind-boggling is that they managed to do so with four fewer players than Auburn. Florida comes in No. 1 in both services' points rankings.

Florida also has the highest average star grade in the league in both sets of ratings, with a 3.89 in both the Scout and Rivals lists. Once again, the gap is rather large. Florida leads No. 2 Alabama by an average of 0.39 stars. The Tide leads No. 7 Ole Miss by 0.24 stars.

This year, there's no doubt that the best class in the league -- and, depending on what Boy Wonder does at in the next few days in L.A., perhaps the nation -- signed with Florida. They are recruiting more talent than anyone else in the league in total and by the average grade of the recruit. It's almost impossible for the Orange and Blue to keep outrecruiting everyone like this, and they have the "advantage" this year of having a large number of upperclassmen and draft-eligible juniors. (It is the third-largest class in the SEC.) But odds are that there are going to be a lot of members of this class whose names you will remember from SEC title games and maybe national championship showdowns in the near future.

There was some debate last year about whether averages should count or whether they should be weighted or how to account for the fact that a class could have, for example, more five stars but have a lower average because it also had more three stars. (I'm really simplifying the argument here.)

But averages matter in part because of the fluctuation in class size. While I haven't (yet) gone back and combined the 2009 and 2010 Team Speed Kills 12 rankings, doing so in the future might give us a better idea of who has the "best" recruiting success. Why?

Let's say a program has only 19 real scholarships this year -- i.e., they can sign up to 25 students in a class, but the total scholarship limit (as opposed to the per-class limit) is going to be exceeded if they go above 19. Some programs will sign 19, some 20, some 21. Others might not be able to make the limit. But next year, a program is likely to have a larger number of scholarships, maybe all 25. Some programs might get 25 letters of intent, some 26 -- you get the idea.

That's why the averages are important. Who has lead in average stars two straight years, once in a relatively small class (16) and once in a more robust class (28)? Florida. Who has the highest average point total, over classes of 27 and 27.5? Alabama.

So Auburn's bouquet looks a little less impressive when you realize that there are 32 recruits in the class, but the Tigers come in at No. 5 in average talent. They were eighth last year, so Gene Chizik is likely to have to outcoach Nick Saban -- please, stop laughing -- if the Opelika faithful are going to start once again proving they can count fingers any time soon.

Georgia benefits most from averaging, going up three places because the Dawgs only have commitments from 19 players this year. Moving up one: Alabama, LSU, Mississippi State. Down one: Tennessee, Ole Miss, Arkansas.

Of course, that's all relative. There's not such a large gap between most of the upper-tier teams that it's going to take a heck of a lot of "coachin' 'em up" to make most of these teams very good. There are some league champions that would likely take the No. 3 or No. 4 class in the SEC.

In the end, coaching still plays a pivotal role in all of this. Ron Zook proved that winning in February doesn't automatically translate into winning in November. It sure helps -- does anyone think the spread option would work as well with Vanderbilt's level of recruits as with Florida's? -- but it isn't fait accompli.

So that's where Ole Miss, South Carolina, Arkansas and the rest have to make up the ground. In superior coaching. As the recruiting services get ever better at figuring out who the best recruits actually are, and as we get more and more data about how those classes turn out, we'll begin to see how much better coaching has to be to make up for losses when the only football being played is the Super Bowl.