Share All sharing options for: For Mississippi State, Hope Returns to Starkville

Second in a series on the 2009 season in the SEC and what it means.

Of all the things Mississippi State fans might be grateful for in 2009, perhaps one of the most obvious is that the team wasn't on the losing end of a game in which five total points were scored. Or rather, that they never seemed to be in a position where the winning team was going to be able to claim victory with little more than a field goal.

After all, this was a team that has seemed to set new 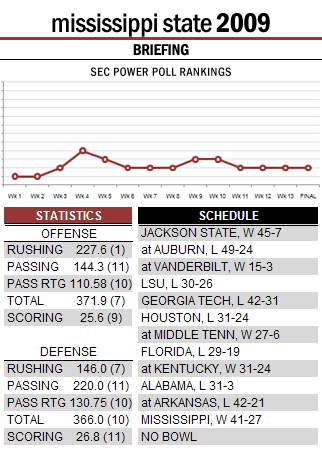 standards for offensive ineptitude every year under Sylvester Croom. And while this year's version of the Western Division Bulldogs wasn't about to score 70 against anyone they played, it did score 40 twice -- once against FCS team Jackson State and once against rival Ole Miss in one of the oddest games of the 2009 season. In other words, there were the signs of competence for the first time in a long time.

It wasn't an illusion. Dan Mullen's first Mississippi State team gained 97 more yards per game than Croom's last team. (That the Bulldogs were still below average in the defense-minded SEC gives you an idea of how bad things were in the Croom Era.) They scored more than 10 additional points a contest.

And, of course, the only Mississippi State score of the game was never a safety.

All that said, there are still questions about whether the Bulldogs can improve more in 2010 -- or even stand pat. After all, much of the increase came from graduating RB Anthony Dixon, who went from gaining 72.4 yards per game in 2008 to gaining 126.5 yards a contest this season. The passing game actually gained 30 fewer yards per game -- which isn't a death knell if Mullen is going to implement a run-heavy spread, but does mean that he'll need to find someone who can pick up the yardage lost with Dixon headed to the NFL.

The other indicator moving in the wrong direction for Mississippi State is defense. The rankings didn't change much -- the Bulldogs remained 10th in the league in total defense in 2009 -- but Mississippi State gave up almost 40 more yards per game this year than last, with the pass defense the main problem. Inexperience might be to blame for that, but it's still not something to ignore for too long. It's also the reason you won't hear too many State fans weeping over Carl Torbush's move to Kansas; the job of fixing the Bulldog defense goes to Manny Diaz.

Expectations, of course, never take into account the nuance behind an improvement. And so it's hard to question Chris Low when he says that it will be "a huge disappointment in Starkville next season if they're not in a bowl game." In the mind of fans, at least, it almost certainly will be.

What isn't hard to question is how State will do it. For Dan Mullen, the first year turned out to be the easy part.