Share All sharing options for: Vanderbilt Faces Questions on Future

First in a series on the 2009 season in the SEC and what it means.

After a season of being a somewhat improbable bowl team, Vanderbilt returned in 2009 to being, well, Vanderbilt. Not that this was entirely unexpected in the broader sense -- there were plenty of reasons to believe that the Commodores would face a strong case of reversion to the mean -- but the extent was more than a slight surprise.

Vanderbilt went from 7-6 to 2-10, combining their usual league losses with a defeat against Army and the end of a two-game winning streak against South Carolina. They finished at or near the bottom of the league in every major 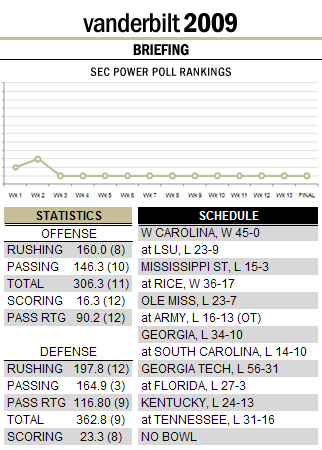 On a more subjective note, the Commodores were ranked No. 12 in the SEC Power Poll by the third week and never recovered. The decision was often unanimous and almost always nearly unanimous.

Which should raise some troubling questions for Vanderbilt fans. Because if Bobby Johnson is truly the best head coach in Nashville in several years -- and by almost every account he is -- then what does the past season say about the goals Vanderbilt fans should set for their team?

Because while some regression was to be expected, Vanderbilt did return 17 starters to a team that went to a bowl for the first time in more than 25 years in 2008. No one thought the Commodores were going to win the SEC East, but few thought they would win two games and go winless in the league.

The question about goals is different for Vanderbilt than for Ole Miss, Kentucky and South Carolina. Those teams have proven they can be perennial bowl teams, with Ole Miss showing signs of a solid program. The only question that remains is whether it's realistic for any of them to expect to travel to Atlanta in early December any time soon -- or ever.

For Vanderbilt, the question is whether going to the postseason with any sort of regularity is a reasonable expectation.

It's not clear that Johnson has the answers. After all, his much-discussed "shake-up" -- essentially taking the offensive coordinator title away from Ted Cain -- might make sense on some level, but it's not going to fix the Commodores' offense. They actually gained more yardage -- by about 50 yards per game -- in 2009 than in 2008. There's a reason that even Vanderbilt fans are comparing the move to the proverbial re-arranging of deck chairs on the Titanic.

And if Johnson can't turn things around in Nashville, if he can't take the Commodores to a bowl every year or every other season, can anyone who might coach Vanderbilt hope to do so? Or should fans just accept that bowl games are going to come once a generation, and not once an autumn?

Perhaps most importantly: How exactly will we know when those questions are answered?