Share All sharing options for: Outback Bowl Preview: Florida, Penn State Mark the End of an Era or Two

We know for a fact that this will be Urban Meyer's last game. Joe Paterno has been trying to tell us it won't be his last game. Which means that there's only one thing to do -- TUNE IN ON SATURDAY AND FIND OUT FOR SURE. And feed Joe Paterno lots and lots of brains, just to be on the safe side. He's already a bit cranky about this "last game" business.

The fact of the matter is that neither Meyer nor Paterno really wants to go out like this. Florida was given the ticket the Outback for two reasons: The game is in Tampa and South Carolina had just gotten waxed in the SEC Championship Game. 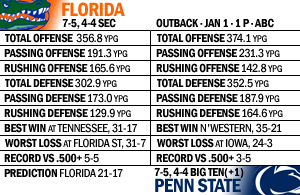 Oh, and the Outback likes to be as weird as possible. But Florida really isn't very good. Not in the traditional Florida sense. They stand at 7-5 on the season, lost to teams the Gators usually regard as also-rans, and saw an offense that was a slight disappointment in 2009 implode in 2010.

But Florida, for all the usual complaints about its strength of schedule, actually faced 10 FBS teams that were at least .500 on the year. Granted, that includes teams like Kentucky and Miami (OH), but it's still not as easy as it looks to do pretty well against a list of teams that are consistently defeating the rest of the opposition. What made Florida disappointing this year is that it did poorly against almost every good team it faced, losing to Alabama, Florida State and South Carolina by wide margins. Even LSU and Mississippi State, the two quality opponents against whom Florida was competitive, defeated the Gators in the Swamp.

Penn State, meanwhile, didn't beat any of the "Big Three" in the Big Ten this year. Wisconsin was off the schedule, and both Ohio State and Michigan State defeated the Nittany Lions in November. The latter was a close game, but a loss is still a loss.

For all that, there are some striking similarities between these two teams. Both had to rely on first-year starters. Both are led by coaches either at or near the end of their current stint in the business. Both have seen more success on the defensive side of the ball than the offensive side. Florida much more so, but I digress.

Or maybe not. The fact is that neither of these teams are going to light up the scoreboard on a normal day. Of course, as we've noted more than once, bowl games are not normal days. But when you have two teams who can't do much on offense, you might as well go with the team with a better defense. And the one who actually knows that it's trying to send the coach out with a win.