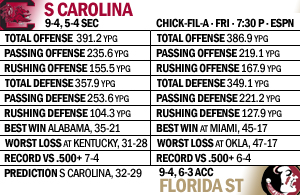 Joe Morrison led the Gamecocks to their only 10-win season. And yes, Bobby Bowden was coaching at Florida State then. Then again, as you might have heard something about in the past several months, he's no longer coaching there now.

Of course, there's another "same opponent, different situation" storyline running through Friday's showdown: Steve Spurrier against the school he used to call "Free Shoes University," joyfully needling his cross-state rival despite limited success against them. Spurrier was 5-8-1 against Florida State, though he won the most important game of the series during his time in Gainesville, waxing the Seminoles in a Sugar Bowl rematch that served as the de facto 1996 national championship game.

And there's no doubt that Spurrier is out for revenge. Not only does he apparently love to be hated by the Florida State faithful, his beloved alma mater was demolished in Tallahassee at the end of the regular season. And while Spurrier might be a Gamecock now, he still has a great deal of loyalty to Florida. (Most Gamecock fans understand that Spurrier will always be a Florida fan whenever they're not playing South Carolina, and probably even when they are after he retires. And we're fine with that.)

But even once you get past all the storylines that ESPN will repeat over and over during the bowl, there's actually a pretty good football game to be played. It's one of only eight bowl games to feature two ranked teams -- and that's counting the four BCS match-ups that feature a pair of schools appearing in the polls. Both teams played in their conference championship games, and both did well against teams who finished the year at least break-even. They are about the same statistically in total offense and total defense. We've already seen that all of that can go out the window in a bowl game, but this is a great game on the merits.

The biggest factor going for the Seminoles is South Carolina's lackluster pass defense. Which makes the news that Christian Ponder will play for Florida State disappointing for the Gamecocks, but maybe not as much as you think. Statistically, Ponder is not as good this year as he was last year. Blame injuries, blame the two games he missed, etc. But the numbers don't lie. Ponder is averaging 1.3 yard per attempt less this year than last. His completion percentage and passer rating are down, and he's taken seven more sacks in 36 fewer attempts. He has a better TD-to-INT ratio (20-8 vs. 14-7), but that's the only concrete sign of progress in the passing numbers.

And while Stephen Garcia has improved markedly in terms of efficiency and completions and almost every other category, he's done so in part because he's throwing the ball less and handing it off more -- to the new offensive star in Columbia, freshman RB Marcus Lattimore, who's run for 1,198 yards and 17 TDs. Lattimore has been hit or miss so far this year, but now that's he's fully rested, Florida State will need to stop him early if they want to shut down the Gamecocks' offense. Then again, focusing too heavily on Lattimore could give Garcia time to find Alshon Jeffery, which hasn't been a recipe for much success for South Carolina's opponents this year. (The Gamecocks have lost only one of the seven games in which Jeffery has at least 100 yards receiving. They are a .500 team when he doesn't make that milestone.)

Neither of these teams winning would be a surprise. In a coin-flip game, though, you have to go with the SEC over the ACC.