Could two teams come to a bowl with perspectives that differ more dramatically? After all, this is one of the last bowls that Georgia wants to be at -- the Liberty ranks almost at the end of the SEC pecking order. For Central Florida, meanwhile, this is where you go if you win your conference; this is essentially their Sugar Bowl. 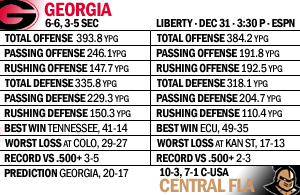 since the SEC-Conference USA combo started in 2006. That year, South Carolina defeated Houston by eight in a wild shootout. Mississippi State won 10-3 against Central Florida the following year, and East Carolina played Kentucky close in 2009 (25-19) and took Arkansas to overtime in 2010 (20-17). Yes, I know those dates don't look right. The game was played in December through 2007-08, then went to January the last two seasons, and now is back in December this year.

So if there's a team that truly wants to be here, it's Central Florida. Barring a miracle undefeated season with enough quality wins to get into the BCS, this is the goal a team sets out with at the beginning of the year; there's no disappointment. Georgia walks in after a season that saw the Dawgs just get bowl-eligible, and have a couple of near-death experiences along the way.

On the other hand, consider where Georgia is right now. There is no real indication that Mark Richt is still coaching for his job right now; he will remain in Athens barring something happening in the offseason, though this game could certainly set him up for a better run at maintaining his position in 2011. Redemption can be a powerful reason to do things, whether for the players who helped land Georgia in this position or for a longtime head coach whose name merely being in the same sentence with "hot seat" still seems slightly surreal.

And there's a longtime Georgia nemesis across the field. Most of the players won't remember George O'Leary, who faced Mark Richt only once. (Georgia won, 31-17.) This is a rematch that seems to have even less punch than the Game Formerly Known as the Peach Bowl, in part because the Georgia-Georgia Tech matches never had as much on the line as Florida-Florida State when O'Leary was there and in part because neither coach built a significant part of his legend on defeating and needling the other team.

Not that O'Leary doesn't want this win in a way. After all, he was on a three-game winning streak in the rivalry before Richt came along and O'Leary took his ill-fated detour through Notre Dame. Another win against Georgia, one that would seal the Dawgs' first losing season since 1996 and show that his Conference USA team is as good as a team from the much-hyped SEC, would be a best-served dish of revenge for O'Leary.

But going back to that history, there's one thing that should catch your attention. The Conference USA teams have always keep things close, but they've never won it, and there's no reason to believe they're going to start doing so now.