And so, despite all odds, here they are. You could almost pick several teams during the 2010 season when the one reasonable goal the Volunteers could have this year -- to make it to a bowl -- was dead in the water, suddenly out of reach. The combined 79-30 annihilations against Florida and Oregon, the two overtimes needed to defeat UAB, or the winless October that saw the Vols lose three of those games by at least two touchdowns.

There were plenty of reasons to think that Tennessee would never make a bowl game. But Derek Dooley 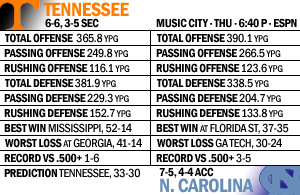 and company managed to find their inner Nazi soldier and win the needed games to play in Nashville for the right to be called champions (of the Music City Bowl). It might not be the easiest path to the postseason, but it's certainly better than the alternative.

It also wasn't all that bizarre to think that UNC might not make a bowl game after their lineup was decimated by the AgentGate fallout. After all, even as some of the players got back on the field, there was the looming cloud of sanctions and the loss of an assistant coach and the questions about whether there were more shoes to drop. But the Tar Heels are in the ACC, and strange things happen there with regularity.

So what the Music City Bowl brings to the table this year is a battle of two teams used to fighting for survival. North Carolina has the better record against bowl-eligible teams and the better statistical numbers, but that doesn't account for the red-hot November that Tennessee put together, admittedly against the weakest part of the Vols' schedule. (It also could bring us a four-plus hour game in regulation, given that neither of these teams can run the ball with any consistency.)

In the end, bowl games are about momentum and who wants to be there more. Both teams should be applauded for getting their against the odds they faced, but this was always the destination for Tennessee, while North Carolina had a higher ceiling before it fell down on them. That gives the Vols the edge -- in yet another fight to the finish.