Combined BlogPoll Ballot and the Other Half

Share All sharing options for: Combined BlogPoll Ballot and the Other Half

Ties broken: LSU-Boise State under the homerism bonus for SEC teams (if there's a major outcry over this, I would be willing to change it); Arkansas-Iowa under the same; Missouri-Arizona-Oklahoma, because Missouri had the highest vote and my ballot won on that count, so I went with Year2's order on Arizona-Oklahoma; South Carolina-Nevada-Texas A&M, with the homerism bonus going to South Carolin and Nevada edging Texas A&M by having the highest vote on either ballot.

My ballot is after the jump.

I'm not entirely sold on LSU being ahead of Boise State, but I've got the middle of LSU's schedule ranked well above the middle of Boise's and the biggest two wins just a touch ahead of Boise's. If you take the names off the teams, you can argue that a 29-7 win against Mississippi State and a 24-21 win against Alabama are better than a 33-30 win against Virginia Tech and a 37-24 win against Oregon State. It's just enough to balance out LSU's seven-point loss to my No. 1 team.

I almost moved Nebraska into the Top 5, but the loss against Texas is just too much for them to overcome. Stanford's demolition of Arizona is enough for them to move past good teams at Oklahoma State, Michigan State and Alabama. The Tide is the first team with two losses on the ballot, but they've got about as good a collection opposite those losses as anyone else in the country.

Can someone please defeat Ohio State so I can remove that awful schedule from my ballot completely? I see Purdue as the second best win on their resume -- Purdue! Arkansas gets a lot of credit for annihilating South Carolina by three touchdowns at home; even give the Gamecocks' usual November woes, that game was impressive. Iowa's got one good win, two respectable losses and a lot of mediocre filler. Dan Mullen is very quietly putting together a team in Starkville that might not be just good, but great.

Part of why Missouri was arguably overrated was because of their win against Oklahoma; that's all been fixed now. Yes, I overrated Arizona at the beginning of the year, and that has also been fixed for good. Nevada is now ranked ahead of Utah, which is just fine by me, since I'm not sure Utah should be ranked to begin with.

All of these are teams that I could argue shouldn't be ranked. The one that I'm somewhat pleasantly surprised I still ranked was South Carolina. It's always hard to figure out where to put a team after a loss that bad, but South Carolina still has a win impressive enough to keep them ranked for now. Ooh, Florida has reappeared. (No, for those of you who might be wondering, I did not do that just to make South Carolina look good if they defeat them. For one thing, I have almost no expectation right now that South Carolina will defeat them.) Any replacements for Southern Cal will be considered. To reiterate: ANY REPLACEMENTS FOR SOUTHERN CAL WILL BE CONSIDERED. PLEASE HELP ME. 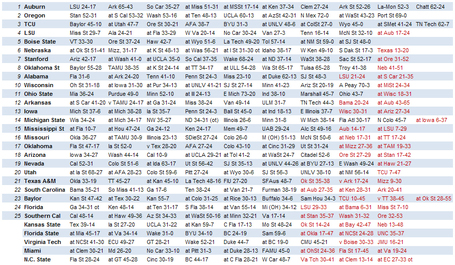