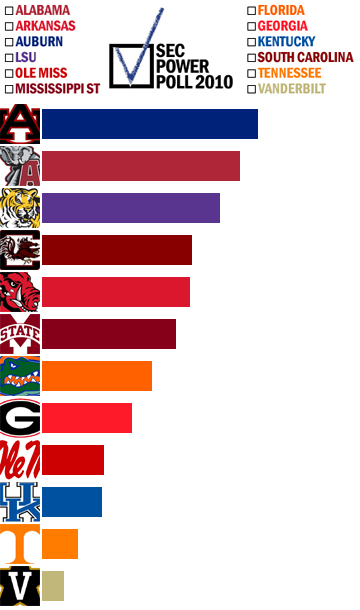 We had very low turnout this week for a variety of reasons. (Midterm election joke goes here.) A couple of team's voters appear to have something better to do, like another sport to cover or something, I don't know. One of our voters was so down about the results over the weekend that he eschewed ballots altogether. And the founding blogger didn't get a vote in on time because of covering an election in which the state didn't have a winner until almost 15 hours after the polls closed.

In any case, voters also might have been lulled to sleep by their ballots and simply forget to submit them. There are only a handful of changes: Florida and Georgia swap, Kentucky goes down one and Ole Miss advances. One oddity is that Georgia swept the eighth-place votes, something you usually don't see below about second or third place. Your last-place votes went to Tennessee (2) and Vanderbilt (7). South Carolina and Arkansas are one point apart headed into their showdown this weekend.

Just imagine what a Cam Newton injury would do. (This is why their relatively middling defensive play is a concern to me.)--Rocky Top Talk

Cam Newton should not be allowed to catch touchdown passes. It's not fair.--Alligator Army

BCS Championship Bound ... or not. They are Auburn, remember? The BCS doesn't so much "like" them.--Red Cup Rebellion

Just do us all a favor and get Miles out of the BCS game talk for good. Thanks.--Rocky Top Talk

Back to their winning ways -- fear this.--Leftover Hot Dog

Conference-wise, the off week didn't have much effect, but nationally, it was a very good weekend for the Tide.--Get the Picture

Let's just hypothesize that Miles takes the Colorado job or something crazy like that. Would Chavis be retained by the next head coach?  That's the only successful thing in Red Stick right now.--Rocky Top Talk

I know we're two-thirds of the way through the season, but I still wonder just how good LSU's defense really is. None of their first seven opponents could exactly be called high-octane offenses, and opponent #8, Auburn, pretty well shredded them (526 yards, including an amazing 440 rushing) even if it wasn't readily apparent on the scoreboard.--Hey Jenny Slater

Gary Crowton with an off week.  Imagine the possibilities.--Get the Picture

Just two more bullets to dodge for the Gamecocks to make it to Atlanta.--The ACC and SEC Blog

Marcus Lattimore is a man among boys. He has scored a touchdown in every game he has played and has two games of 180+ yards of rushing. In SC's two losses, he was held to 33 and 79 yards rushing.--Alligator Army

The clock strikes November. Not putting Tennessee away until the middle of the fourth quarter doesn't exactly inspire confidence.--Get the Picture

We'd trade a bunch of those extra TDs against Vandy for a healthy Greg Childs.--Arkansas Expats

Saturday's game against South Carolina will show if the Hogs really recovered from the losses to Alabama and Auburn. Beating Vandy and Ole Miss is no accomplishment.--Alligator Army

With Greg Childs out now, it's hard to imagine Arkansas rising any higher than third in the SEC West.--Red Cup Rebellion

Apparently the "cowbell etiquette" of Bulldog fans is improving. They're also flossing more regularly, and remembering to always put their dirty clothes in the laundry basket.--Arkansas Expats

It's the first of November and Miss State has seven wins. Safe to say Dan Mullen is turning around the program.--The ACC and SEC Blog

The death of Nick Bell makes your stomach hurt. When a person passes away before their prime, especially one that is in seemingly perfect physical condition, it should make you cherish each day you have.--Alligator Army

Whether it was Rainey's return, Meyer's vaunted bye-week tinkering or just the fact that they were going up against the Dawgs, the struggling Gator offense came within a stone's throw of setting a new single-game high in yardage for the season. If they'd played like THAT the last few weeks, I dare say they'd be 7-1 right now.--Hey Jenny Slater

The Gators are a better team with Rainey and a healthy Jeff Demps.  But in years past, a Florida team with a plus-3 advantage in turnover margin in a Cocktail Party game would have crushed Georgia.--Get the Picture

One more round of coordinator firings ought to do the trick ... --Rocky Top Talk

Todd Grantham likes to talk smack. Too bad his defense can't back it up.--The ACC and SEC Blog

Aaron Murray will be a great quarterback some day. But Mark Richt might not be around to see it.--Alligator Army

If nothing else, Houston Nutt's somewhat craven grab for Jeremiah Masoli has started making a lot of sense. Just imagine how bad the Rebels would be right now without him.--Hey Jenny Slater

Glimpses of a good team but seems too late in 2010.--Leftover Hot Dog

When Rodney Scott tackled the blocker on the kickoff instead of the ball carrier who went for a TD, I thought that play epitomized Ole Miss football.--The ACC and SEC Blog

If Marcus Lattimore doesn't leave the Kentucky-South Carolina game just a few snaps into the second half, the Wildcats are probably riding a six-game skid right about now.--Hey Jenny Slater

Time for UK's annual run to a crappy bowl game played in the state of Tennessee.--Alligator Army

Not good enough to overcome turning the ball over a bunch.--Get the Picture

Having a QB controversy is a good thing for UT.--Leftover Hot Dog

I don't blame Derek Dooley for not suspending a player who knocked a fellow student unconscious in a bar fight. Dooley needs all the players he can get.--The ACC and SEC Blog

Yes, they are 0-5 in the league. But they should have defeated LSU, played UF and Oregon hard for a half, and the Gamecocks needed four takeaways and a 70-yard touchdown pass in the 4th quarter to defeat the Vols. They are the best 2-6 team in the country.--Alligator Army

Between Tennessee and Vandy, there's one decent game's worth of football to be played. And one very, very horrible one.--Rocky Top Talk

On the plus side, they have an excellent graduation rate.--Arkansas Expats

After the season, we'll look back on that win over Mississippi and marvel.--Get the Picture