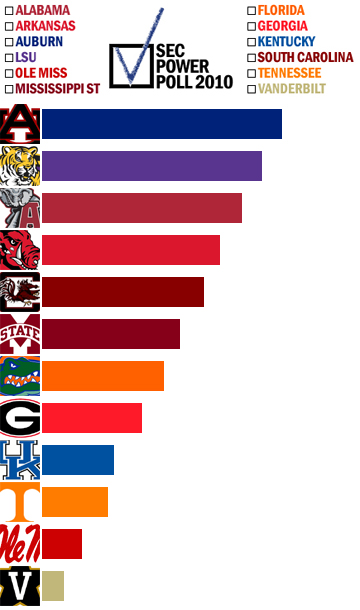 Nine of your last-place votes go to Vanderbilt, with the other one going to Ole Miss.

We had a relatively light turnout this week, which could be due to the impending holidays but could also be because no one anything they disagreed with or a reason to update their ballot. No team moved up or down in this week's poll, and the first eight teams were consensus picks, if you ignore one ballot that had Arkansas and South Carolina flipped and another that had Mississippi State at No. 7 and Florida at No. 6.

One little hurdle between Auburn and the national title. Well... if you don't count the expanding list of potential violations.--Over the Pylon

Cam Newton has all the highlights, but the real star of Auburn this year is their offensive line.--The ACC and SEC Blog

As excited as I am about the Iron Bowl, I'm almost more excited at the prospect of listening to Finebaum the following Monday, regardless of what the outcome of the game is.--Hey Jenny Slater

How many other BCS conferences could the Tigers actually win? Probably all of them.--Over the Pylon

Les Miles almost gave away all the good will he has re-built this season against Ole Miss.--The ACC and SEC Blog

I'm not sure what would make Tide fans happier... winning another title or costing Auburn the shot at one.--Over the Pylon

I have a feeling there's going to be a lot of "asterisk" talk out of Tuscaloosa if Auburn manages to knock off the Tide.--Hey Jenny Slater

Razorbacks would be winning the East, as it is, they're 4th in the West. That's example # 3,452 that there's quite an imbalance in this league.--Over the Pylon

Petrino getting things done at Arkansas this year.--The ACC and SEC Blog

At the point in the second quarter when the Gamecocks went up over 50 against Troy, Steve Spurrier had to feel like he was back in the Swamp again.--Hey Jenny Slater

At halftime, an astonished Steve Spurrier said the Palmetto State Poultry had never had a game like their outing against Troy, and he indicated that he intended to run the ball and play his reserves in the second half. Who are you, and what have you done with the real Darth Visor? More to the point, how the heck did the Evil Genius become the easiest coach for whom to root among the conference's top five teams?--Dawg Sports

The Bulldogs fought hard against Arkansas but came up short. I'm sure a win over Ole Miss will assuage the pain.--Garnet And Black Attack

Did everything they could to win the Arkansas game. Except win it, of course.--Get the Picture

The Gators looked good against App. St., but can they do it against FSU? They've been dominating bad teams and stinking against good ones all year.--Garnet And Black Attack

Steve Addazio gets a vote of confidence? The must be something far more serious wrong with Urbs than we thought.--Over the Pylon

Give a Florida fan a bottle of bourbon or some sodium pentothal, then ask him whether he wishes Urban Meyer had stayed retired and Jeremy Foley had hired Dan Mullen to replace him. If you find a Gator booster who tells you he's glad Nikki Meyer didn't get her daddy back, let me know.--Dawg Sports

The biggest news for the Dawgs this week was scheduling Boise St for next year. Not a great sign.--Arkansas Expats

Three months ago, Dawg fans had a glimmer of hope that the UGA-GT game might put them over the top into a BCS bowl. Now we need a win just to get into any bowl.--Hey Jenny Slater

For the seventh Saturday this season, some or all of the Georgia coaches and players took the weekend off. Unfortunately, the first six such Saturdays fell on days on which the Bulldogs had games scheduled.--Dawg Sports

Could this be the year that the Cats take down the Vols? Probably not, but it's good to dream.--Over the Pylon

I would say that if Kentucky is going to beat Tennessee, this is the year. But I have also said that three or four times recently.--The ACC and SEC Blog

If the 'Cats can't finally get over the hump against Tennessee this weekend, then we may eventually see Notre Dame-Navy being eclipsed in the record for longest streak of rivalry futility.--Hey Jenny Slater

The Volunteers have a one-game season against a team they have beaten 25 straight times.--The ACC and SEC Blog

Rocky Top showing life but it is way too late.--Leftover Hot Dog

The season's turning out just like they planned it.--Get the Picture

If they learned anything from Arkansas on dealing with Nutt, I'm sure Rebel fans are working on their Freedom of Information Act requests as you read this.--Over the Pylon

Biggest upset of the season: that Houston Nutt hasn't pulled an upset.--Arkansas Expats

LSU-Ole Miss may be the conference's most underappreciated rivalry. In the future, to save time, the league office may just want to give both teams 30 points and let them play for six minutes.--Dawg Sports

After looking at the box scores from the past few weeks, I'm thinking that maybe Vandy should have started playing Jared Funk long ago.--Garnet And Black Attack

Look on the bright side, 'Dores... I'm just kidding... there is no bright side.--Over the Pylon