Other Half of the BlogPoll Ballot: In Which We Debate the Merits of TCU, Boise State

Share All sharing options for: Other Half of the BlogPoll Ballot: In Which We Debate the Merits of TCU, Boise State

Ties broken: TCU-Boise, for reasons that should become clear in a moment. Wisconsin-Stanford, because I had Wisconsin lower and really have no problem with that. Arkansas-Michigan State, because of the homerism bonus for SEC teams. Missouri-Nebraska, because there's really no way to resolve the Big XII fairly right now. Arizona-Virginia Tech, because the Wildcats have not lost to an FCS team. Iowa-Florida State-Utah, because both Iowa and Florida State had higher votes on at least one ballot and Iowa plays in a more difficult conference.

As for my half of the BlogPoll ballot:

I'll be honest with you; I'm not sure this makes a heck of a lot of sense, but it's what I've got right now. Before we get into all the rankings, though, I want to address the debate that is currently at the center of the college football conversation: Boise or TCU.

My answer for now remains the same as it has throughout this debate: TCU. But this might be the last week that I answer that way. That's because I went back to using one of my old victory charts for TCU and Boise, and the results made it clear that a convincing victory of Nevada will and should move the Broncos ahead. A less-than-convincing but still comfortable victory probably will. A close win is where things start to get murky.

In any case, the chart should be self-explanatory, but it's been a while since I've used it. So the short version: You get more points for a weaker victory than a stronger one. The points are based on how the victory compares to the wins of the other team, and you obviously want as few points as possible. 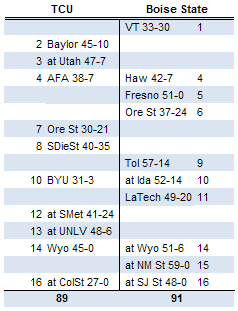 It would be incredibly close even if the instrument were more scientific. So for now, it supports my subjective decision to rank TCU as No. 3 and Boise as No. 4. But it also makes me realize that Boise should be No. 3 -- if they defeat Nevada this week.

Aside from the TCU-Boise deal, there's not much to talk about here. I did finally and somewhat reluctantly move Boise ahead of LSU, both because of the respect I gained for Boise's schedule by doing the victory chart, and because LSU's narrow win against Ole Miss weakened their resume against Boise's when the Fresno annihilation was added.

Please, Michigan, defeat Ohio State this weekend by about five touchdowns. I'm not sure there's anything here that really needs to be detailed, but I'll be glad to answer any questions or objections.

Yes, I know that Nebraska is four spots ahead of a Texas A&M team that just defeated it. Nebraska has also defeated two of the three teams that have defeated A&M. And if I move Nebraska to the "right" spot in that department, I'll then have them below a Missouri team the Huskers defeated. So move Missouri. And then you have Missouri ranked below A&M, who lost to the Tigers. There's no way to fix the problem, which is why I don't always follow the "Team A defeated Team B, so Team B must be ranked lower than Team A" logic.

Oklahoma looks less impressive the more time passes. I'm still not all that blown away with what Virginia Tech has done, given that they are a member of the ACC. Arizona is far from as good as I thought they would be, and Nevada will zoom up the ballot if they win this weekend.

All these teams probably shouldn't be ranked, but I'm at a loss for any suggestions about who should be. Hooray State!

The chart, which you'll have to click if you want to make it legible. All FCS wins have been removed this week, both because I don't have room, and because there are far more data points that are far more valuable at this point.